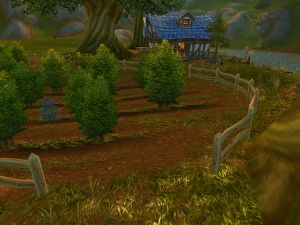 Mirror Lake Orchard is situated in western Elwynn Forest, on the southern banks of Mirror Lake. Although the trees growing here used to produce fresh fruit, they had all been picked and eaten by Defias Bandits who had taken possession of the orchard as well as the nearby cottage. Whoever lived here has long gone, another victim of the growing banditry in the region... until recently.

In the lead-up to the Cataclysm, Mirror Lake Orchard was commandeered by Twilight's Hammer cultists, led by Overseer Sylandra. Alliance adventurers were tasked to infiltrate the cultists' activities.

Since the Cataclysm, the Twilight cultists have left, and three humans - Ian Jolly, Joanna Jolly, and Samantha Cleland - have appeared behind the previously deserted cottage. It is possible they are the original residents of the Orchard.