Misconceptions is chapter 1 of Curse of the Blood Elves. It was a large engagement waged between the crumbling Alliance, under the command of Grand Marshal Garithos, and the Scourge for control of the ruined city of Dalaran.

At Grand Marshal Garithos' base camp, near the outskirts of Dalaran, Kael'thas and his warriors arrive bearing ill news. 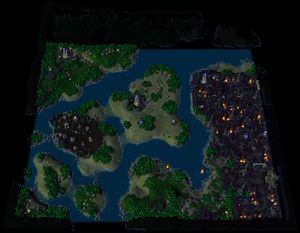 The Blood Elves, having aided the Night Elves to bring Illidan to justice whilst the Demon Hunter sheltered within the ruins, were already stationed in Dalaran when Garithos summoned their leader, Prince Kael'thas. Garithos informed Kael of a large Scourge army approaching the city. The Undead had split their forces, attacking the city from the mountains to the south whilst a second army got into position to the east. Garithos rallied his men to meet the Scourge to the south, whilst assigning Kael and his Blood Elves the humiliating task of repairing the Arcane Observatories within the city, to spy upon the Undead movements to the east.

Kael began the repairs of the first Observatory, he fought his way through Dalaran where he had to defeat mutants, bandits, dark and renegade wizards, and Burning Legion spawn. Kael remembered that he had buried four treasures in that area, so he defeated some dark wizards and bandits and claimed his treasure. When he reached the Goblin Shipyard for ships, however, he found that some ghouls had destroyed the shipyard but was aided in crossing Lordamere Lake outside Dalaran by Lady Vashj and her Naga, who, sensing kindred spirits, had been watching the Blood Elves' affairs. Finally Kael reached the island and secured a gold mine killing some crabs, then he vanquished a small Undead vanguard to the west of the island and some forest trolls to the north claiming a goblin shipyard and a goblin merchant. He repaired the Observatory of the island and sailed away to his next destination. He searched the rest of the hidden treasures, one was warded by ogres, and completed the repairs of the third Observatory that was warded by gnolls. In a lull in the fighting to the west, Garithos reappeared and warned Kael against consorting with the Naga, whom he considered "inhuman".

The Observatories in this area served Lordaeron well when they were in operation. Repair them to reveal vision of the area to your army and comply with Garithos' command.

There are several hidden caches of gold, lumber and items hidden around this area. Find them all to bolster your resources and power.

Kael'thas and his warriors arrive at Garithos' base camp.

Grand Marshal Garithos: You are late, Prince Kael'thas. I thought you elves prided yourselves on punctuality.

Prince Kael'thas: It could not be helped, Lord Garithos. We ran into a group of night elves from across the sea, and --

Grand Marshal Garithos: I am not interested in your fanciful excuses! You elves are here to serve the Alliance: thus, you will obey my commands to the letter! Is that clear?

Grand Marshal Garithos: Now, the undead have begun a new offensive to retake Dalaran. Their primary strike force marched south through Silverpine, but we managed to halt its advance at the base of the mountains.

Prince Kael'thas: My men are ready to fight, milord! When shall we leave for the front?

Grand Marshal Garithos: We will be leaving immediately. But, your people will be staying here. Our scouts report that a second strike force may be heading this way from the east. I need you to repair the outlying observatories so that we can monitor that region.

Prince Kael'thas: But, milord, we are warriors, not--

Grand Marshal Garithos: You have your orders, Prince Kael'thas. I trust your elven ears heard them clearly enough. Move out!
Garithos and his soldiers leave.

Prince Kael'thas: Insolent son of a… Let's get this over with!

Kael'thas' forces reach a lake, only to find that the goblin shipyard is in ruins.

Prince Kael'thas: Damn. We'll have to find a way across the lake to reach the outlying goldmine.
Lady Vashj and a group of naga suddenly slither out of the nearby waters.

Prince Kael'thas: Naga! You fought for the demon Illidan!

Lady Vashj: We are on our own now, good prince. I am called Lady Vashj. My brethren and I come in peace, to offer you our aid.

Prince Kael'thas: You have nothing I need, witch.
Two more naga appear, escorting transport ships across the lake.

Lady Vashj: Is that so? I thought you might require boats to reach the observatories you seek.

Prince Kael'thas: And you would give these freely? Why should I trust you, my lady?

Lady Vashj: Our two races share a common ancestry, Kael. Now, against the undead, we share a common peril. These boats are merely a gesture of goodwill.

Prince Kael'thas: Then I accept your offer. Thank you.

Prince Kael'thas: That's done it. The observatory has been repaired. Let's move quickly and get to work on the others.

Prince Kael'thas: This observatory is repaired. We need to move on to the next one.

Prince Kael'thas: Hail, Lord Garithos. The observatories have been repaired as you requested. We were just about to--

Grand Marshal Garithos: I received ill news from the front line. Is it true that you've consorted with the vile naga?

Prince Kael'thas: Well, yes, milord. They helped us cross the lake. I assure you they pose no threat to us or to--

Grand Marshal Garithos: They are inhuman and must be crushed like any other enemy! Be careful where you place your loyalties, blood elf. I will not tolerate treason in my ranks. Now I must return to the front. You will remain here and wait for further orders.

Prince Kael'thas: They've begun their attack! We must push them back!