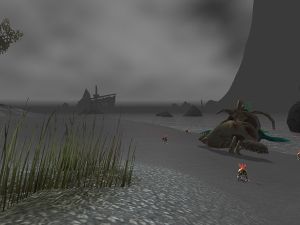 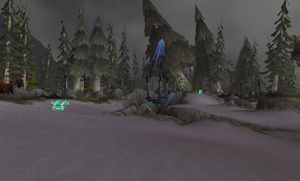 Twilight's Hammer base at Mist's Edge

Mist's Edge is by far the longest stretch of coast in Darkshore, reaching all the way from near the Ruins of Auberdine in the south through Lor'danel to the region's northern tip. It is dominated by gloomy bays and gray beaches, often littered with huge carcasses of sea animals — which are part of some quests — and dotted with the wrecks of sunken ships. Murlocs are an ever-present threat, but even more common are the crabs which scuttle along the entire stretch of shore.

There is a Twilight's Hammer encampment here. They are boiling the water in one of the fissures created by the Cataclysm, creating Enraged Tidal Spirits. Moon Priestess Tharill has been sacrificed on an altar, and tasks players with calming the tide in Elune's name. The camp is led by High Cultist Azerynn.

[13] Twilight Plans implies that the encampment may have been intended to be a separate subzone called "Twilight Encampment," but this is not the case.

During the War of the Thorns, the coast became a battlefield between the Horde and the night elves racing for Azerite.