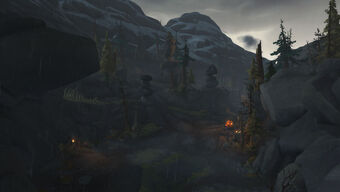 Mistfall Cleft is a canyon in northern Tiragarde Sound and the home of the Grimestone troggs. The cleft is carved into the mountainside itself, with many caves dotting the cliff face and providing shelter to the large Grimestone population. The area is also home to many saurolisk, whom the troggs tame and ride into battle against their foes.

In the past, the grandfather of the current Lord Aldrius Norwington drove the Grimestone tribe from the surrounding area and into Mistfall Cleft to found Norwington Estate, where they remained contained. However, the troggs' proximity to the new estate would make conflict with the humans inevitable.

Eventually, the Grimestone launched major raids from the cleft into Kul Tiran territory and have almost overrun the nearby estate in the past.[1] The son of Lord Norwington himself, Eddie, would even become captured by the Grimestone troggs at one stage, only to be rescued by outside assistance.[2]