Mistlurkers, as their name implies, are creatures that lurk within the mists of Pandaria, and seem to be made of it. They make their first appearance with the World of Warcraft: Mists of Pandaria expansion.

Normally mindless and predatory, the ones of the Townlong Sumprushes show signs of intelligence. 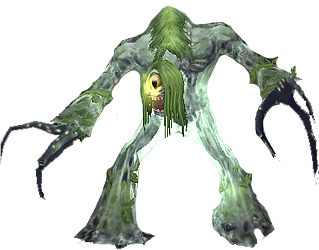 The mistlurkers are primitive peaceful creatures living in the Lower and Upper Sumprushes of Townlong Steppes. At some point the yaungol shaman, who used special torches to communicate with them, started working alongside them. However, recently the mist-shaman started using those same torches to control and kill the mistlurkers that refused their orders.[1] Most of them do not speak the languages spoken by humans or orcs, however a few like Orbiss have learned to speak it.[2]

The mist helps sustain their bodies. Mist that is warm and fragrant, like the mist in the Upper Sumprushes, is nutritive to them.[3] They also ingest plants[4] and plant-like creatures, like the nature spirits[5] and drink the blood of creatures they can capture.[6]

The crew of the Barnacle encountered a mistlurker when venturing into the caves of the Timeless Isle. They were surprised when the moss and lichen lining the wall detached itself and began shambling toward them. A choking gas billowed from the mistlurker's many fungal blossoms. The vines and ferns making up its hide regrew rapidly wherever it was struck.[7]

Mistlurkers are also found on the fungus-covered world Naigtal accessed through Invasion Points. One Mistlurker is known to live on Argus, the Tar Spitter. 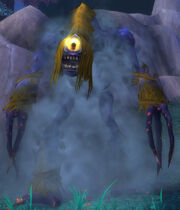