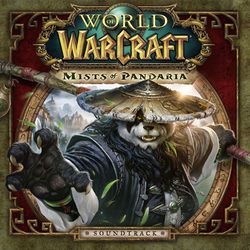 The World of Warcraft: Mists of Pandaria Soundtrack was composed by Russell Brower, Neal Acree, Sam Cardon, Edo Guidotti and Jeremy Soule. It was released together with the collector's edition of the game. The soundtrack can also be purchased via iTunes.

Shrouded in mists since the world was sundered more than ten thousand years ago, the realm of Pandaria has remained unspoiled by war. Its lush forests and cloud-ringed mountains are home to the pandaren, a race that celebrates life to the fullest even while facing the rising darkness in their land. Now Pandaria has revealed itself just as the Alliance and Horde draw close to a devastating new conflict.

Explore this mysterious continent and its exotic denizens through a rich variety of new melodies. Have the mists of Pandaria parted to reveal Azeroth's salvation? Or will the battle to control this breathtaking land draw the two mighty factions into worldwide war?