From Wowpedia
(Redirected from Modera)
Jump to: navigation, search 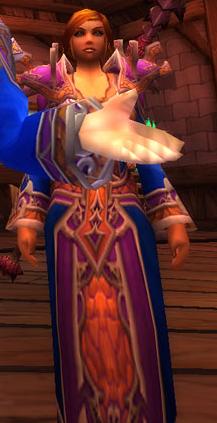 Modera in Road to Damnation.

Archmage Modera is a member of The Six, the elite body that governs all operations within Dalaran. She appears to be one of the most long-standing members of the Six, having apparently been active as a member during the Second War up until now. Modera and Drenden worked together closely, and she is also a close friend and ally of Aethas Sunreaver.[2]

After the Second and Third War

As a member of the Council of Six, Modera was present at the meetings of the secret council where the members discussed the possible return of Deathwing. The council, Krasus especially, chose Rhonin to send him on a mission to investigate whether Deathwing had really returned. The ruling mages then learned about a mysterious person known as Daval Prestor who was rumored to be Deathwing. Modera and Drenden then worked to discover if it was true and thus traveled to the Capital City to meet both, Terenas and Prestor. They were unable to discover more about Prestor. Thanks to the efforts of Rhonin, Krasus, Vereesa and many others, Deathwing was defeated once more and Modera was present at the final meeting where the members summarized what has happened.[3]

Shortly before the Third War, Modera spoke out against Kel'Thuzad's use of necromancy, and was present when his experiments were discovered, leading to his expulsion from the Kirin Tor.[4]

Modera survived the destruction of Dalaran and stayed in the city.[5] 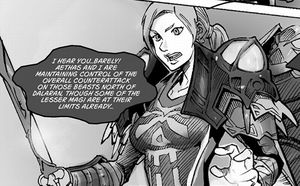 Modera in World of Warcraft: Mage.

Modera took part in the defense of Dalaran after the city found its footing above the skies of Northrend. She and Aethas Sunreaver defended the city from the blue dragon onslaught, using their great powers to create a magical shield around the city. She, Aethas and Rhonin remained in telepathic contact throughout the attack, and joined forces to confront the treacherous Crevan.[6]

Modera was supportive of the blood elves being admitted as members of the Kirin Tor once more, agreeing with her Council of Six comrade Archmage Aethas Sunreaver's plight to see the sin'dorei readmitted officially. Which of the two archmages was truly behind this notion proved a source of wry (and bitter) amusement for the Grand Magister of Quel'Thalas, Rommath, whose disdain for Archmage Modera and her supposed indifference during the blood elves' escape from the Dungeons of Dalaran had not been dulled by their years apart, or lessened by the Kirin Tor's status as a traditional ally to Quel'Thalas.[7]

During the war against the Lich King, Modera can be found in the Kirin Tor's capital of Dalaran, alongside Rhonin, Vereesa Windrunner, and Archmage Aethas Sunreaver. She also appears as an image at Stars' Rest in Dragonblight, giving missions to Alliance adventurers to stop the Blue dragonflight.

During the War Against the Nightmare, the Emerald Nightmare enveloped Azeroth as well as Dalaran. Malfurion contacted Modera, only to find her very exhausted.[8]

Ansirem Runeweaver, Modera, and a few other mages arrived near Booty Bay to save Ansirem's daughter Catelyn when she and her crew were under attack from the Bloodsail Buccaneers.[9]

Some time after the death of Deathwing, Modera was present during the meetings of the Council of Six and Jaina Proudmoore who was asking for help in defending Theramore and attacking Orgrimmar. She insisted that Dalaran is neutral and will not attack Orgrimmar.[10]

Though not visibly present during the Purge of Dalaran, Modera was both sad and angered that the Kirin Tor's efforts to remain above the war had been ruined.[11]

At some point, Modera was looking for Jaina to inform her of an urgent matter. She sent her visage to Jaina's chamber but found no one there though Jaina was there, invisible. She left her a message to come to see her and left the room.[12]

During the war against the Thunder King, Modera traveled to the Isle of Thunder as a commander in Jaina Proudmoore's Kirin Tor Offensive, dealing with the saurok threat.

Modera appears at Socrethar's Rise with a small group of Kirin Tor. She assists Alliance and Horde members in dealing with the Sargerei threat, mentioning that while she could single-handedly wipe their village out, Khadgar has suggested a more subtle approach to discern their plans. 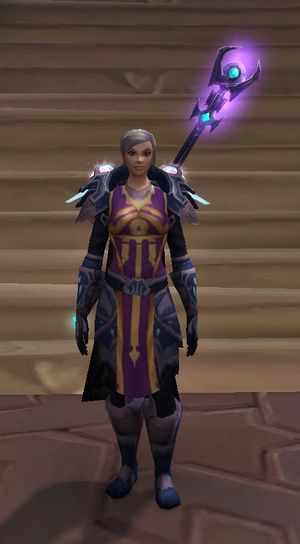 Still a member of the Council of Six under Archmage Khadgar's rule, Modera can once again be found in the Violet Citadel with her colleagues. She aids the soon-to-be new leader of the reformed Tirisgarde in obtaining Felo'melorn, by discreetly contacting them with a message (one whose contents she states will be disavowed if she is approached about it), and helping to arrange a secret meeting with Aethas Sunreaver at Dalaran's original, long abandoned location. Aethas, still banished from Dalaran for his part in the Divine Bell incident, hopes to earn his re-entry into the city by exchanging key information on the blade's whereabouts. Although Modera is willing to help her old friend, she mentions that others on the council are not as forgiving as she is.

When Aethas and the champion return from Icecrown with the runeblade in tow, Modera urges the council to take this recent act into consideration when deciding whether to grant Aethas' request. After a brief discussion, the council unanimously votes to readmit Aethas into the city, urging him not to misuse this chance to make things right.[13]

Modera then joins the Tirisgarde herself.[1]

Modera participated in the Battle for the Exodar battling against High General Rakeesh, alongside Archmage Kalec.

When alchemists pluck a hair from Khadgar's head for the Black Market, Modera teasingly asks him if he wants her to kiss his head when he reacts in surprise.[14]

How may I help you?

The Magical Kingdom of Dalaran

I am ready to be teleported to Dalaran.

If we can incite them against the mogu, they can draw attention away from our men.

While both the Horde and the saurok attack the mogu alongside us, either could turn on us at any moment.

I could wipe out this entire village if I chose.
But that is not why we are here. As I have learned through the years, sometimes you need honey to catch a fly.

Disturb its denizens, and we will get stung. Destroy it in flames, and we will destroy the precious honeycomb as well.
The only way to retrieve the information we seek is through sublety.

<The stately archmage takes a deep breath.>
There's nothing like the smell of clean air and danger.

There are those who lust for power, and do not know how to wield it.

I will do anything in my power to prevent that from happening again.

Modera in Tides of Darkness?

An unnamed female member of the Council of the Six was present when Khadgar told the council the information about Medivh. The woman is described as tall and statuesque woman. It is unknown whether the member was Modera or someone else.