Modimus Anvilmar was the last High King of the united dwarves of Ironforge prior to the War of the Three Hammers.[1] An immense statue of Modimus stands guard at the Gates of Ironforge.

Prior to the War of the Three Hammers, the dwarven race lived in peace under Ironforge Mountain. However, their society grew too large within the confines of their mountain cities. Though the mighty High King, Modimus Anvilmar, ruled over all dwarves with justice and wisdom, three powerful factions had arisen amongst the dwarven society — the Bronzebeard clan, the Wildhammer clan and the Dark Iron clan.[1] Modimus was known for his diplomacy when dealing with these three clans,[2] and the Bronzebeards, ruled by Thane Madoran Bronzebeard, held especially close ties to the High King.[1] However, Modimus is perhaps most notorious for his death;[2] after the High King passed away from old age[1] and before his eldest son could be officially crowned, civil war broke out between the three clans.[2][3]

While Modimus has long since passed on, he is a revered hero. His descendants, the Anvilmar family, continue to play an important part in dwarven history to this day,[2] and he is depicted by the great statue at the Gates of Ironforge.[2][4]

Modimus wielded the Hammer of the High King, which disappeared during the civil war. Many years later, the three pieces of the hammer, each held by one of the three dwarven clans, were to be publicly reforged into one as an act of unity between the members of the Council of Three Hammers. However, due to the discovery that the original parchment stating that the hammer had been shattered in the first place was fake and that two of the hammer fragments may have been fabricated as well, Kurdran Wildhammer shattered his piece of the hammer and instead proposed that the dwarven clans move forward from the past and unite with a fresh start.[5]

There is a small village called Anvilmar in Coldridge Valley, likely named after him. 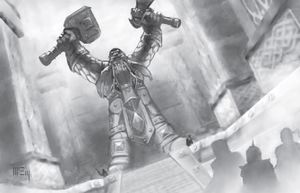 He had closest ties to the Bronzebeard clan by blood and history.[6] The mighty statue of King Anvilmar is found at the city gates of Ironforge. It is a massive statue nearly 100 feet high. The dwarf depicted there wore intricate chain armor and held two great hammers on high. His mouth was open in a soundless battle-cry.[7]