Mogor the Ogre is a notorious ogre mage and former leader of the Laughing Skull clan. During the events following the Second War, Mogor and his clan betrayed Ner'zhul's Horde by aiding the Alliance Expedition in closing the Draenic side of the Dark Portal. Sometime thereafter, Mogor seemingly abandoned the Laughing Skull and instead became the champion of the Warmaul clan, and now serves as the final encounter of the Ring of Blood in Nagrand.

Almost nothing is known of Mogor's life, other than the fact he has led both the Laughing Skull and Warmaul clans.

Note that the following part was retconned by the novel and played out differently.

Before Ner'zhul rebuilt the Dark Portal to Azeroth and sent his Horde through to gather the artifacts required for his grand scheme, he required the knowledge held by an order of death knights to complete his preparations. This group of death knights was at that time under the control of Mogor, the renegade ogre mage of the Laughing Skull clan, who was using their necromantic magic for creating a powerful spell. Ner'zhul sent his forces, led by the Slayer of the Shadowmoon clan, against the Laughing Skull to subjugate the death knights and kill Mogor for his treachery. With the help of Grommash Hellscream, who was freed from captivity at the hands of the Laughing Skull clan, Ner'zhul's attack succeeded.[1]

Mogor was defeated and Ner'zhul gained the knowledge to open the Portal.[2] Mogor somehow survived this defeat and was apparently accepted back into the Horde, as were his clan.

When the Alliance Expedition invaded Draenor, they laid siege to Ner'zhul's fortress in Shadowmoon Valley to retrieve the Book of Medivh but didn't find it; unbeknownst to them, the Laughing Skull had stolen it before the siege.

Mogor and his clan then approached them; the ogre-mage complimented them on their strength, but told them they had no chance of standing against the Horde. They wanted to take advantage of the war to further their holdings in the Blade's Edge Mountains, so he made the Alliance an offer: in exchange for the Alliance's strongest fighters defeating forces of the Thunderlord and Bonechewer clans in the area with the help of Laughing Skull warriors and supplies, he would give them the Book of Medivh. They were naturally surprised at his offer, which Mogor scoffed at, asserting that only the strong survived within the Horde - even if that meant siding with the enemy.[3]

Despite the Laughing Skull's well-known untrustworthiness and his own capacity for treachery, Mogor was true to his word and gave them the book, even though he knew they intended to foil Ner'zhul's plans. He and his clan managed to avoid retribution for their betrayal. 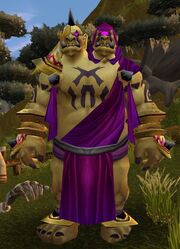 After Ner'zhul opened many portals to worlds beyond Draenor, his reckless sorcery led to Draenor being torn apart until only Outland remained, but Mogor survived. Most if not all of the Laughing Skull orcs, either willingly or by force, drank the blood of Magtheridon and became part of Kargath Bladefist's Fel Horde. Mogor, however, never joined them, and seemingly severed his ties from his orcish followers completely.

Mogor is now a high-ranking member of the Warmaul ogre clan and leads a portion of their forces based in the Laughing Skull Ruins - ironically, the former holdings of the orc clan he once led - in northern Nagrand. He watches, while shouting insults at you, during the battles in the Ring of Blood. After you finish pummeling (or getting pummeled by) the 5 elites, Mogor himself comes down to fight you personally. He is ultimately killed.

He has a slight heal, but has a ton of health, making it a very annoying ability. When he is first killed he will resurrect himself (He will have less health this time around) and will enrage, hitting for over 1000 damage on plate armor. 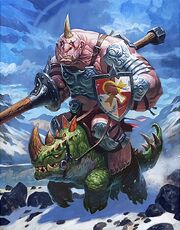 A champion of Mogor at the Grand Tournament.

Before the Laughing Skull

Mogor led the Laughing Skull clan during the Second War, but is not shown to be connected to them in Warlords of Draenor. As the earliest reference to Mogor in the main timeline was in the Second War, it's possible he only took command of the clan around then.

Warlords of Draenor also shows Mogor with only one head, implying that he was one of the many ogres magically given two heads by Gul'dan during the Second War.