For the companion pet found in Zul'Aman, see 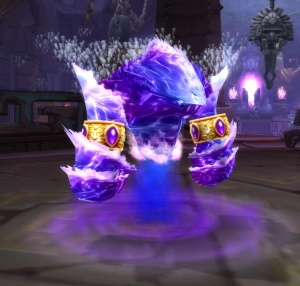 Mojo is a substance, usually seen in liquid form that trolls use in their voodoo rituals.[1] It is described as being a frothy, sticky substance with a light glow.[2][3][4] Excess amounts are usually carried in flasks and decanters.

Mojo can be taken from trolls[5][6] and animals.[7] Additionally, some ogres are said to use mojo. Some ogre jewelry is said to contain mojo power and at least one ogre known as Warosh had his 'mojo' sucked from him, he tasked adventurers with reclaiming his mojo.

Most of the major troll tribes use mojo in their own unique ways. The Gurubashi tribe of trolls used trace amounts of mojo in their old currency, the Paragons of Power.[8] The Zandalari tribe uses mojo in many ways, their freethinkers employ it in their armor while their illusionists use it in their incantations.[9][10] The Drakkari High Priests empowered themselves with the mojo of their fallen loa and animated their golems with large quantities of the substance.[11][1] The Darkest Mojo is a substance employed by the Sandfury in order to animate their dead into Mummies.[12] The "Darkest Mojo" is described as a black, cottony clump that fizzles in your hands.[13]

Mojo, at least in some cases can be used interchangeably with

Water from water elementals will dilute the effectiveness of mojo without completely eliminating it.[15]