The mok'nathal (also spelled Mok'Nathal[1][2] or Mok'Nathal Clan)[3] are half-ogre, half-orc hybrids.[4] Most mok'nathal are part of a clan found in Outland, though it is nearly defunct. Rexxar, the disowned son of chieftain Leoroxx, was the only remaining one left on Azeroth. Their last remaining settlement is Mok'Nathal Village in the eastern area of the Blade's Edge Mountains. They have hunted down a few draenei.[5]

After battles with the Warsong clan and the rebellion of the Shattered Hand clan, the Gorian Empire was losing power on Draenor and their hold on Nagrand was broken forever. Imperator Kelgrok of the Bladespire clan was greatly troubled by these events and determined to keep his hold on Frostfire Ridge. He did not only mean to keep defenses up but to expand. To make up for the ogres' low numbers, Bladespire sorcerers had conducted cruel experiments to create new creatures that could be used as labor, and the greatest result came from selective breeding between ogres and enslaved orcs. The children of these forced unions were called mok'nathal, possessing the strength of ogres and intelligence of orcs. The Bladespire kept the mok'nathal in chains and bred them together to create even more. To ensure their loyalty, the ogres threatened to kill entire families if even one of the members rebelled.

Imperator Kelgrok unshackled many of these mok'nathal and ordered them to make war on the orcs of Frostfire Ridge. The mok'nathal formed the bulk of the Bladespire army that rampaged across Frostfire, seizing many tracts of resource-rich land. Chieftain Garad of the Frostwolf clan called upon the Whiteclaw and Thunderlord clans that lived nearby to unite, but the Thunderlords - led by Garad's estranged son Fenris Wolfbrother - rejected the offer. Thunderlord orcs raided Bladespire settlements alone in the dead of night, slaughtering young and old alike. In the meantime, the united Frostwolf and Whiteclaw army fought the Bladespire and managed to capture a number of mok'nathal, including their elder Leoroxx.

Garad was surprised to learn that Leoroxx and the other mok'nathal were not willing servants but slaves. Garad and Leoroxx came to an agreement to help each other destroy the Bladespire clan forever. Leoroxx returned to Bladespire Hold and incited open rebellion among the mok'nathal. They rose up against their oppressors and set fire to the stronghold as the Frostwolves and Whiteclaws crashed into Bladespire's outer defenses. The Battle of Bladespire dragged on for a full bloody day before the orcs and mok'nathal drove the ogres out. In the heart of the fortress, Leoroxx strangled Imperator Kelgrok with the chains he had worn for so much of his life.

The orcs and mok'nathal had won but at the cost of many lives including Garad's son Ga'nar, who had sacrificed himself to let many young mok'nathal escape. Afterward, Garad offered Leoroxx and his people land in Frostfire, but Leoroxx declined because he knew the half-breeds would never truly be accepted by the orcs. The mok'nathal settled in a remote corner of Gorgrond. Resources were scarce, but they were able to live in peace. They swore off fighting, only taking up arms to defend their meager lands from threats.[6]

The mok'nathal pushed the Bladespire ogres to Bladespire Outpost.[7] Whether this refers to this battle or another one in unclear.

Eventually, a force of orcs known as the Horde arose on Draenor. Warchief Blackhand offered ogres and mok'nathal a place in the Horde to increase his numbers.[8]

After the fall of Shattrath City and the draenei, Blackhand considered annihilating the mok'nathal but stayed his hand. Rexxar, son of Leoroxx, had joined the Horde and convinced Blackhand to spare his people. Rexxar had not agreed with his father's isolationist policies and longed for battle, as well as believing the Horde could help the mok'nathal find sources of water and food. However, in time Rexxar would learn the Horde's purpose was not noble.[9]

In the novel Cycle of Hatred, Rexxar is described as "the last of the Mok'Nathal Clan", and it further says that he was "Born of orc and ogre blood both, as most of his now-defunct clan."[10] With the revelation that they still exist in Outland, it's likely Rexxar simply believed he was the last one.

The mok'nathal half-ogres were depicted as very tall orcs back in the The Burning Crusade expansion, the idea of them being a mid-point between an orc and an ogre has stuck ever since. 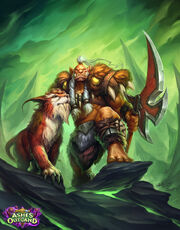 All of these people, with the exception of Rexxar, can be found in Mok'Nathal Village in the Blade's Edge Mountains. Rexxar is located at nearby Thunderlord Stronghold.

As beastmasters, the Mok'nathal are known to tame various pets, including quilbeasts.

Other named half-ogres who may or may not be mok'nathal include Mag Bearmaul, Tagar Bearclaw, Gorsh Talonfang, Maxx Rocmane, Gaz Boartusk, Mok Rocksnout, and Gish Eagle Eye. They are beastmasters that can be hired from Mercenary Camps in The Frozen Throne.

On the alternate Draenor, only Rexxar is seen with no mention of the other mok'nathals.

Half-ogres are named mok'nathal by the orcs, which translates to "The Sons of Nath," who is an ogre war god.[13]

The Horde Player's Guide implies that "mok'nathal" (lower-case) is the Orcish term and honorific for "half-ogre", while half-ogre is the Common name for the race.[13]