The Molten Core is a level 60 raid dungeon located within Blackrock Mountain, home to Ragnaros the Firelord. It was one of two forty (40) player raid dungeons available upon release of World of Warcraft, the other being Onyxia's Lair. Considered the pinnacle of raiding achievement at the time, the Molten Core enticed adventurers to enter the instance in the search of realm glory.

Just before the re-opening of the Dark Portal, Ragnaros - the land's fiery overlord - was cast down from his dark throne and returned to the firelands. Ragnaros now wages war on the world tree Nordrassil. 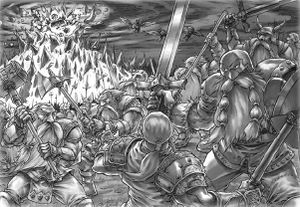 War of the Three Hammers.

The Molten Core was created during the War of the Three Hammers more than 300 years ago. Near the end of the war, Thaurissan, the leader of the Dark Iron dwarves, sought to summon a powerful fire elemental to defeat the combined forces of the Bronzebeard and Wildhammer clans. He was more successful than he could have imagined, as he released Ragnaros the Firelord from millennia of captivity under the Redridge Mountains.

Ragnaros destroyed the city of Thaurissan and created the volcano of Blackrock Mountain. He dwells there to this day with his elemental servants and the enslaved remnants of the Dark Iron dwarf clan. The burning lake where Ragnaros lies sleeping acts as a rift connecting to the plane of fire, allowing the malicious elementals to pass through.

From the Raid Areas page on the official World of Warcraft Community Site:

The Molten Core lies at the very bottom of Blackrock Depths. It is the heart of Blackrock Mountain and the exact spot where, long ago in a desperate bid to turn the tide of the dwarven civil war, Emperor Thaurissan summoned the elemental Firelord, Ragnaros, into the world. Though the firelord is incapable of straying far from the blazing Core, it is believed that his elemental minions command the Dark Iron dwarves, who are in the midst of creating armies out of living stone. The burning lake where Ragnaros lies sleeping acts as a rift connecting to the plane of fire, allowing the malicious elementals to pass through. Chief among Ragnaros' agents is Majordomo Executus - for this cunning elemental is the only one capable of calling the Firelord from his slumber. 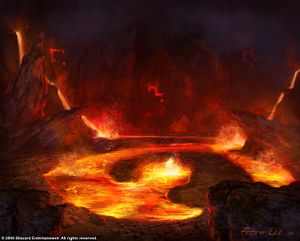 The Molten Core in the TCG.

The Molten Core consists of rock and lava, with the lava forming rivers, small lakes and "lavafalls". Other features are small volcano-like smoke vents, molten cracks in the walls and roof, occasional dark iron deposits, and the runes of warding. Most locations do not have specific names, causing the majority of the Molten Core to be called simply "The Molten Core".

There are three possible ways to enter Molten Core: 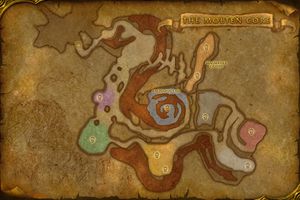 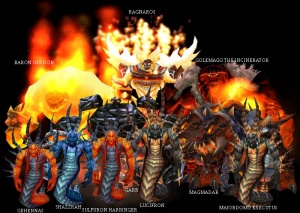 [Core Leather], which can be used to craft armor and weapons available with Thorium Brotherhood reputation.

The item drops themselves are bind on pickup, but the learned pets can be crated and traded. 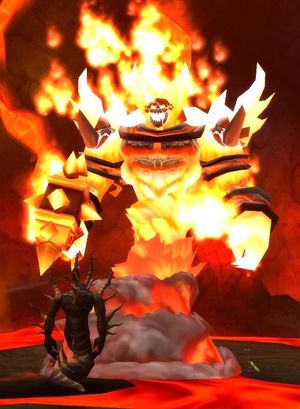 Ragnaros and Executus, with player character shown for scale.

On release, Molten Core and Onyxia's Lair were the only 40-player instances in the game, thus Ragnaros was the first "game end boss." With the advent of Blackwing Lair, Ahn'Qiraj, the original level-60 version of Naxxramas, and the raising of the level cap with the game's expansions, defeating Ragnaros has long since ceased to be the pinnacle of raiding success. However, prior to the Burning Crusade, slaying him was still considered a very important step in raid progression before engaging in more challenging content. It was the first raid encounter which required a concerted effort in acquiring massive amounts of a particular statistic (in this case, fire resistance). Moreover, the encounter was the first one to demand the extensive use of consumables, at least in the learning process and in the first few kills. As such, it was once a very important stage in the evolution of a raiding guild.

Molten Core is now typically only run for the

[Molten Core] achievement, or by players seeking to craft

[Sulfuras, Hand of Ragnaros] or

[Thunderfury, Blessed Blade of the Windseeker]. Additionally, three battle pets were added in Patch 5.1 as part of the

[Raiding with Leashes] achievement, giving players another reason to run the instance.

Players were able to start soloing Molten Core in Wrath of the Lich King, and more easily in Cataclysm and Mists of Pandaria. Now that pre-current-expansion raids do not require a raid group to enter, soloing the raid for transmogrification purposes or other loot is easier than ever. 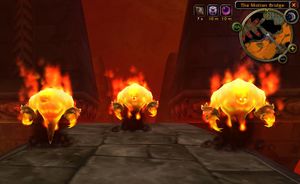 Some of Ragnaros' minor minions waiting to welcome you into the Molten Core.

While technically there are no prerequisites to enter Molten Core through its entrance at the bottom of Blackrock Depths, every Core raider will want to complete the Attunement to the Core quest to enable the shortcut at the bottom of Blackrock Mountain. This quest is given at level 55 by Lothos Riftwaker who is located just outside the Grinding Quarry, on the way to Blackrock Depths. Once attuned you can access Molten Core by talking to Lothos again. When dead (as ghost) you also have the possibility to jump into the lava near Lothos. This can also be done by living players if they have a way to slow fall, or by jumping first onto the small ledge in the pillar on the right as you enter the main chamber of Blackrock Mountain, healing, then jumping down, back toward the wall of the lava pit, to cover the remaining distance to the platform below.

Each of the bosses in Molten Core has a very specific loot table, which includes the Tier 1 armor pieces as well as a number of other epic-quality items.

As stated, the Molten Core includes several mechanics which forces players to fight the bosses in a specific order. These mechanics are:

Powerful players (level 70-80+) can fight the eight first bosses in any way they prefer. It's also possible to skip Lucifron.

For WoW's 10-year anniversary, a special 40-player Raid Finder version of Molten Core was re-released to players as a Looking For Raid instance[1], with the encounters tuned and updated numerically, but "99% of nostalgia preserved".[2] Elemental immunities/resistances were one of the only things "nerfed" in the name of playability;[3] Golemagg's aggro radius was also reduced.[4] According to one developer, watching Blizzard's internal testers do Core Hound packs was glorious.[5]

The anniversary raid appeared as an option in max-level players' Group Finder menus for the duration of the anniversary. The description for the raid read "Celebrate World of Warcraft's Anniversary by running rampant through Ragnaros's hallowed Core, to his very lair", referencing Ragnaros's well-known dialogue just before fighting him. Defeating Ragnaros awarded the achievement

[Boldly, You Sought the Power of Ragnaros], which came with the mount

[Core Hound Chain]. Ragnaros himself also had a 100% chance to drop a helm of the appropriate armor type, each sharing the same fiery model as the original Crown of Destruction item and

[Circle of Flame]. He had a very low chance to drop the companion

[Hatespark the Tiny] and the cosmetic enhancer

[Illusion: Flames of Ragnaros]. Other bosses dropped only gold. All enemies awarded Hydraxian Waterlords reputation just as in the original version. 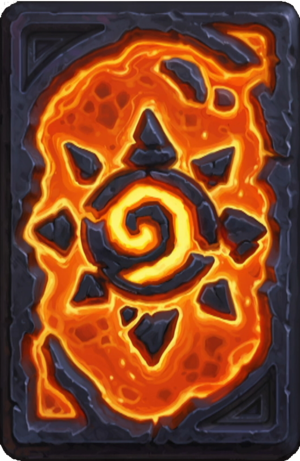 A card back themed after the Molten Core in Hearthstone.