Molthor is a Zandalari troll found above the gate between Stormsea Landing and the Conqueror's Terrace on the Isle of Thunder. He becomes accessible after access to Stormsea Landing is gained. 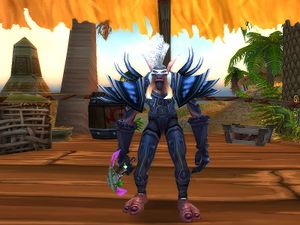 Molthor, titled "Hand of Rastakhan", was on Yojamba Isle with a small group of Zandalari trolls aiding adventurers banish Hakkar the Soulflayer from Azeroth.

After Hakkar was defeated, Molthor and his fellow trolls headed back to Zandalar.[1] That was until the Cataclysm destroyed part of their lands. He, along with those invested in Zul, made their way back to the main lands to reunite the tribes, and eventually to Pandaria. Due to the Zandalari's alliance with Lei Shen, Molthor can be now be found on the Isle of Thunder as a rare mob, after the completion of

Get out of the Thunder Crush area of effect, interrupt the Horrific Visage, and wind up an AoE to take out the Scarab Swarm.