Copper coins with the face of a peon.

Money is some amount of copper pieces (

), or a combination of any those types of coins. Your current total is shown at the bottom right of your open backpack window. In World of Warcraft, money is usually just referred to as "gold". 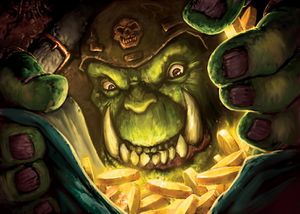 An orc with his bag of gold coins.

Other uses are to buy additional bag slots at the bank or hunters can buy stable slots for their pets from a stable master.

You can get money by looting dead mobs, completing quests, selling items to vendor NPCs, via trade or mail from other player characters, or by selling an item at the Auction House. If you use money to put a deposit down for auctioning an item, you lose the deposit if it doesn't sell or if you cancel the auction, but any failed bids are returned via mail. 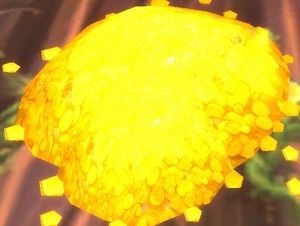 A pile of gold coins

"Coin" as a term can also refer to the currency of World of Warcraft, though its use is mostly limited to quest givers giving out monetary rewards to players.

NOTE: You can never have more than 99

, it will automatically change to 1

in the silver column. The same is true when you get to 99

, if you add another copper then it will automatically change to 1

. There is no conversion rate for gold coins, so you may have more than 99

Money is "created" when:

Money is "destroyed" when:

Money is also traded between players in exchange for items and services, but this does not itself affect the amount of money in circulation.

While leveling a character, a player naturally "creates" hundreds of gold, though much of it is "destroyed/spent" by repair costs and personal spendings.

Since a character starts with no money, it is clear that a perfectly new server has no money in circulation. As the server ages, money will be "created" at a greater rate, as players kill mobs (monsters) that drop more money and do quest with larger rewards.

There is also economic deflation on many realms since gold farmers and bots have a dramatic effect on the local realm economy by selling items at reduced price on the Auction House. This is equally annoying to players as it means their own item value decreases over time. The launch of The Burning Crusade patch had a predictable effect on the economy, as many level 70 players now had gold reserves in excess of 10,000 where before few players would have seen more than 1 or 2 thousand after quite some time at level 60. Auction house prices soared as a result, and twink items were even higher in price than usual. Another effect of the patch was that the market became flooded with "high"-level (level 60) items such as

[Brilliant Chromatic Scale] which was already declining in price on certain realms pre-TBC. Since then these items are now worth much less than they were pre-TBC which has meant players who weren't able to sell them before the expansion have missed out on quite a lot of gold. Of course, the average wealth isn't affected by auction-house transactions, but a lot of players have been put out by the fluctuating prices.

Gold farmers and bots do not only affect the economy via the prices of items but also via the large amounts of gold they make (hence the name "gold farmer"). They have various ways of making gold; the Auction House merely being one of them. On February 21, 2008, Blizzard reported in an announcement regarding gold buying that an "alarmingly high" proportion of all gold bought originates from hacked accounts.[1]

Blizzard often steps in to control the amount of gold in the game, usually in response to the excessive amounts of gold generated by gold farmers and bots. While gold selling and other similar actions such as character selling is illegal, Blizzard has also stated that the economy resulting from it negatively affects the gameplay of the players. An example is their announcement on October 12, 2006, in which they stated that they had banned over 76,000 accounts and removed 11 million gold from game economies in Europe, Korea, and the US during September. This was a continuation from previous incidents the same year in which Blizzard banned 59,000 accounts with 22 million gold in July and 30,000 accounts and 30 million gold in May.[2][3][4]

Other methods of control include the gold sink. The term usually describes a system or factor which effectively "destroys" money, controlling the economy by preventing the in-game amount of money to accumulate out of control. An example would be the

[Mechano-Hog] which both require over 12,000 gold to craft. Another example would be the

Mists of Pandaria introduced another gold sink in the form of the Black Market Auction House. Despite the name, this is not player-run like the faction Auction Houses, but rather a group of NPC vendors who sell rare or discontinued items to the highest bidder. Exceptionally rare items could remove hundreds of thousands of gold from the system.

The WoW economy will always fluctuate, and large events such as the Burning Crusade launch will have a knock-on effect. The best advice to any player worried about an economic decline on their realm is not to buy any gold from gold sellers, as this will have a worse effect on the economy. Also, make sure you price your auctions based on market-value and not just stab-in-the-dark wishwork.

Although it is technically against the ToS to affect other's gameplay in a negative way (including the economy), it's generally accepted that under-pricing doesn't count as it doesn't affect the average wealth of players on your realm. It's also generally accepted that underpricing is very annoying, since other players will find it difficult to sell items at the correct price, and it may even lower the value of the item you're selling. Slight underpricing (up to around 10% of market value off) is acceptable, however. Although little is known about the actual average WoW player's wealth, there is much speculation about it and wherever you look you'll find a different figure. Blizzard has yet to publish anything regarding the economic status of any of the servers in any country.

) because Blizzard stored a character's money as a signed 32-bit integer. Screenshots of characters reaching the previous gold limit were taken on both American and German servers.

Mined from the rich earth of Azeroth and Lordaeron, gold is commonly used as coins in exchange for goods and services. As a rare substance that is always in short supply, gold must be dug out from the rock and soil within established gold mines. Many of these mines were abandoned when the orc raids began and the workers fled for their very lives. Since the beginning of the Second War, these sites are frequently operated while under the protection of military forces.[5] Gold was scarce in Lordaeron, even in the height of the Alliance's power.[6]

Goblins call their currency macaroons,[7] and they refer to money as moolah.

Stormwind's coinage has traditionally been the copper penny,[8] the silver groat,[9] and the gold sovereign.[10]

In the past, all coinage was in gold. After three wars, silver and copper have come into use. Platinum coinage has not come to use yet. The Defias Brotherhood enjoys marring Stormwind minted coins creating "cross-eyed coins” which is a sign of treason to the throne. Some coins that are not minted any longer are worth more to some people.[29]