“Why do we fight? To protect home and family... To preserve balance and bring harmony. For my kind, the true question is: What is worth fighting for?”

The monk is a hybrid class, introduced with the Mists of Pandaria expansion. Monks are able to perform each of the three group roles via different specializations: Brewmaster monks tank, Mistweaver monks heal, and Windwalker monks deal damage using melee abilities. Energy is the primary resource of Brewmaster and Windwalker monks (whom also use Chi as a secondary resource), while Mistweavers use mana instead. Monks are available to every race except goblins, worgen, and Lightforged draenei.

Whatever their combat role, monks rely mainly on their hands and feet to do the talking, and on a strong connection with their inner chi to power their abilities. Abilities such as

[Chi Wave] heal their allies while at the same time damaging their enemies.

When the pandaren were subjugated by the mogu centuries ago, it was the monks that brought hope to a seemingly dim future. Restricted from using weapons by their slave masters, these pandaren instead focused on harnessing their chi and learning weaponless combat. When the opportunity for revolution struck, they were well-trained to throw off the yoke of oppression.

Masters of bare-handed combat, monks never rely solely on the need to have a weapon in their hands to defend against their enemies. Although most widely known to the outside world for their fearsome jabs and flying kicks, they refuse to limit themselves to a single method of combat. Many monks prefer instead to “soak it up” and seem to revel in the intoxicating effect of absorbing blow after blow while their companions press the attack. Other monks specialize in calling upon the restorative power of the mists to balance the good and bad energy within people, returning them to good health and fortune.[1]

Monks bring a unique martial arts style to any fight, and harness an exotic form of magical energy that’s unfamiliar to those who practice other arcane arts. They seek spiritual balance in life and in combat, and as dangerous as Monks can be on the battlefield, they’re rarely looking to pick a fight without just cause. They view the world through a different lens, finding power through serenity and inner peace—then expressing it through artful combat techniques and powers that mend life. Perhaps most surprisingly, Monks are also adept at producing powerful brews they consume to aid them in battle.[2]

Monks are known for their skill in hand to hand fighting, relying on their fists and feet as much as their weapons. Monks can also specialize in calling upon the restorative power of the mists to heal allies.

Nearly 12,000 years ago, long before the War of the Ancients, the continent now known as Pandaria was ruled by a monstrous race of warlords known as the mogu. Their reign was incredibly harsh and brutal. Mogu taskmasters forbade their slaves to carry weapons. During these dark times, many pandaren tried to lift the spirits of their beleaguered brothers and sisters. They were the storytellers, the brewmasters, and the healers who helped knit their oppressed society together in the midst of darkness.[3]

As the mogu empire began to fray, the pandaren saw an opportunity for a revolution. Because they had no weapons, they trained common people to fight with their unarmed fists and feet. They mastered the use of positive energy - or 'chi' - to empower themselves.[3] These unarmed resistance fighters would become the first monks.

For the history of the spread of the ways of the monk to the other races, see Monk races.

Despite both using the Spirit of Life, monks are differentiated from shamans in their inability to ask the elements for help.[4] 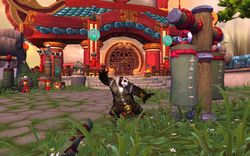 A pandaren monk in training.

The monk class can be played by all races except goblins, worgen, and Lightforged draenei:

Below is a brief exploration of some of the racial traits most relevant to monks. For a full list, see Racial trait.

For a full list of specialization abilities, see Monk abilities 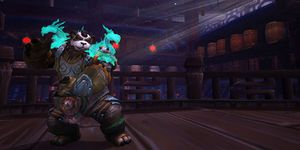 A sturdy brawler who uses liquid fortification and unpredictable movement to avoid damage and protect allies.

Brewmasters are capable tanks who use a combination of ancient martial arts techniques and drunken taunts to draw the attacks of their enemies and soak up damage. Brewmasters absorb and stagger damage, while provoking their enemies with traditional brewing-based attacks.

The brewmaster is a quirky character, though dangerous when underestimated. Brewmasters may seem to struggle with balance as they chug their concoctions in the middle of a fight, but this unpredictable behavior is far from foolhardiness. Most opponents barely have time to process the erratic nature of the brewmaster’s fighting tactics before they find themselves laid low—possibly the result of a keg smash to the head. When an opponent actually manages to land an attack, it’s often unclear how much the brewmaster feels it . . . if at all.[2] 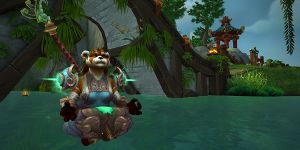 Mistweavers are healers with a sideline in damage dealing. As well as a range of traditional healing techniques, Mistweavers may also use melee range attacks to increase the effect of their healing spells, through certain combinations such as

Mistweavers are unique among those who heal. The energies they channel are mysterious, oftentimes misunderstood by commoners—who rarely travel beyond the borders of their homelands—as some form of folk medicine. But those who weave the mists wield the power of life’s essence, using a mixture of preventative and restorative spells to mend their allies’ wounds. The inner tranquility that guides mistweavers allows them to sustain their healing for long periods of time, and gives them the strength to care for multiple injured allies.[2] 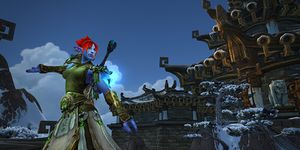 A martial artist without peer who pummels foes with hands and fists.

Windwalkers are damage dealers, focusing on dealing melee damage through a range of martial arts abilities. With their lightning kicks and furious fists, Windwalkers can pummel nearby foes, but also have some ranged attacks and can use their legendary abilities to move swiftly across the battlefield. In addition to Energy, Windwalker Monks use Chi as a secondary resource.

Among monks, none have mastered the martial arts as the windwalkers have, and few across Azeroth can fight with their grace. Windwalkers possess unparalleled physical finesse, and are capable of overwhelming their enemies with a dizzying flurry of punches and kicks. Their skill comes primarily from a lifetime of intense training and discipline, but the power they exhibit is shrouded in more mysticism than meets the untrained eye. The combination of their peak physical conditioning, state of inner calm, and leveraging of mystical chi makes windwalker monks a true force to be reckoned with.[2]


Brewmaster and Windwalker abilities are influenced by real life martial arts style, such as a form of Wushu, commonly known as Drunken Boxing, which inspired some of the Brewmaster's animations. Other Brewmaster abilities such as

[Ironskin Brew] further this fantasy (even though Wushu does not involve actual drinking). Mistweavers typically focus on maintaining the balance of life energy around them, calling upon the mists to heal their allies and disorient their foes. In addition to these fantasies, each specialization revolves around an August Celestial; Brewmasters revere Niuzao, Windwalkers fight with the fury of Xuen, and Mistweavers call upon the aid of Yu'lon and Chi-Ji.

Monks are culturally considered ascetic and studious. When Malygos is in humanoid form, he takes the shape of a studious monk or similar individual.[5] Pandaren are formidable monks, following their philosophies to the letter and perfecting their martial arts as they see fit.[6] Runemasters are said to be monk-like as well.[7]

Monks were initially a denied class in the original Warcraft RPG sourcebook, at the time believed not to be relevant to the Warcraft world.[8] However, monks were later incorporated through the runemaster, and references to monks appear throughout various points in RPG lore as well as in World of Warcraft. However (at the time) no specific monk class was ever created in the RPG, and no specific lore was ever given.