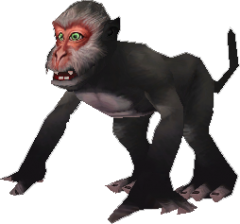 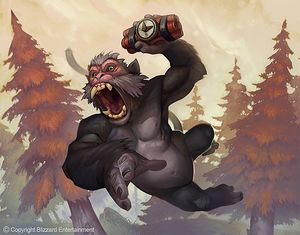 A monkey in the TCG.

Monkeys are a species of primate and infamous tricksters.[1] They are found at the Cape of Stranglethorn, in Northern Stranglethorn and the Lost Isles.

Some monkeys are found within the Deadmines as they have been forced by the Defias Brotherhood to mine the caverns for them. They have been enslaved by the pygmy race on the Lost Isles to mine kaja'mite and because they came in contact with this ore it had the same effect on them as it had on the goblins: it made them smarter. Because of this, they made up a plan to take over the Kaja'mite Cavern on the Lost Isles.

A legend among the tol'vir tells of a wicked djinn whom the Ramkahen sought to destroy. In an attempt to prevent his own death, the djinn tried to transfer his spirit into the body of a monkey. He was slain right in the middle of the transference, and only a fraction of his essence had moved over - only enough to possess the monkey's paw.[2]

Rikki belongs to a type of monkey called marmosets.[3] The hozen are an intelligent monkey-like race found in Pandaria and on the Wandering Isle.

Monkeys are a new type of pet introduced in Cataclysm, who are Cunning instead of Tenacity like their gorilla cousins. They are tamable by hunters starting at level 10. Monkeys, through use of their

[Bad Manner], blind enemies for 4 seconds on a 1 minute cooldown, extremely useful in PvP. However, as of Patch 4.0.6, the ability now breaks upon damage taken.

There are five different skins available for monkey pets, including color-changing models like