For the building of the same name, see Monolith (building). 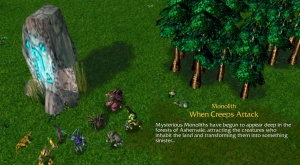 Monolith is an official scenario map of Warcraft III: The Frozen Throne.

Scouts have spotted strange pillars of stone in Ashenvale. These Monoliths seem to imbue the woodland creatures with a new and deadly purpose. Destroy the Monoliths to free the forest from their control.

Mysterious Monoliths have begun to appear deep in the forests of Ashenvale, attracting the creatures who inhabit the land and transforming them into something sinister...

This event probably happened after the death of Archimonde, because the mentioned forces were fighting on the same team against the forest creatures. In the scenario the player had to fight against a random team of creeps (dark trolls, satyrs, furbolgs, forest trolls, spiders, wolves or skinks) each type having its own units and even a hero, the goal being to destroy the Monolith and freeng the creeps from its evil influence.

Entering the code "-creepmeout" allow the player to play as the Monolith monsters. The player loses all his buildings, they are replaced by a Monolith. The Monolith can train monster workers. A player can create simultaneously all kinds of monster buildings, not only those of a single monster race. However, he can only have one hero.