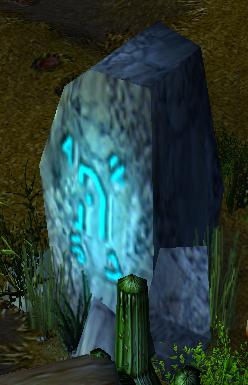 Monolith Glen is considered one of the most fascinating areas in Mulgore, and some say in all of central Kalimdor. The small grove of upright obsidian black stones was set by the night elves aeons ago. The massive stones are covered in ancient Kaldorei runes and are avoided by the local centaur and tauren. No one knows why the night elves chose this spot to be hallowed ground, and research has so far not uncovered any clues.[1]

This may be describing the "Resurrection Stones" seen throughout northern Mulgore in Warcraft III: The Frozen Throne.