Monte Krol is Lead Software Engineer at Blizzard Entertainment.[1] He has worked as tool programmer,[2] Lead Tools Programmer,[3] and voice actor since Warcraft III: Reign of Chaos[4] through World of Warcraft: Wrath of the Lich King.[5][6][7]

He was born in Chicago. He is a lifelong video game player, he started playing on Atari and learned to program pretty early on. He got a degree in computer engineering and went to work writing software but his life passion was video games; he worked in a company called Game Refuge but later on looked up a job at Blizzard because he liked the games Starcraft and Diablo.[2]

He and his staff members build the programs that the rest of the team uses to build WoW, there are couple different kinds of programs but the one that has the most people dedicated full time to it is WoW Edit. He and his staff also try to make things easier to the designers, so that they can be more efficient. Their principal downside, like in all software developments, are the bugs.[2] 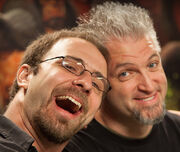 Krol and Terran Gregory sharing a moment on Azeroth Choppers

"I started playing Alliance for a rather pedestrian reason: I liked how the characters looked better than the Horde races—although I still really love how the Tauren look. I have been playing mostly Night Elves since WoW launched. My obsession with look lasted about 15 minutes, and I got hooked on the "down but not out" feel of the Alliance in the original WoW story—the nearly destroyed World Tree Nordrassil slowly recovering, the ruins of Lordaeron, and even the name of Menethil Harbor were deep emotional connection points for me with the story of the Alliance. And, of course, the most visceral connection I made was walking through the Plaguelands and encountering Uther's Tomb for the first time—remembering Uther Lightbringer and his most infamous pupil, Arthas. I guess I have a strong connection to “heroes passed.”"[8]