From Wowpedia
(Redirected from Moon Well)
Jump to: navigation, search 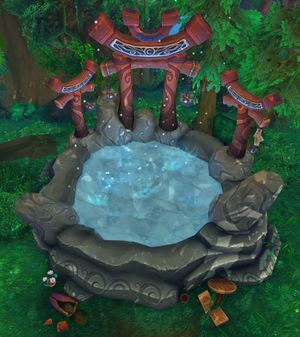 A moonwell in Val'sharah. 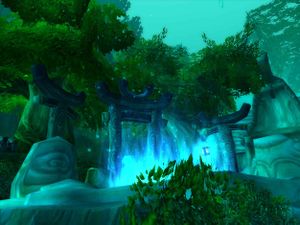 A moonwell in Moonglade. 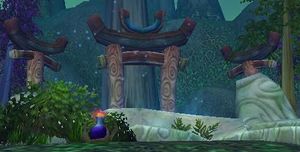 A moonwell in Teldrassil. 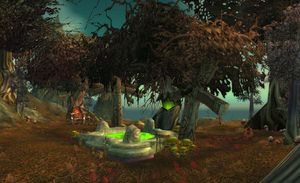 A corrupted moonwell in Felwood. 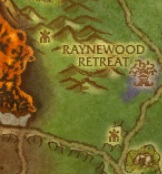 Moonwells marked on the map.

A moonwell (also spelled moon well) is an upwelling of magical waters created by the night elves to maintain and restore their magical powers. They are stone pools filled with silvery glowing water.

Little is known about the first moon well or how the moon wells proliferated through Azeroth, despite the taboo on overt magical practice among the night elves.

Moon wells are hallowed repositories of the sacred waters of the Well of Eternity, the pool of energy that gives life to the mystical World Tree. When additional water is added, these wells nourish the night elf troops with their life-sustaining waters. Additional moon wells become necessary as the night elf forces grow in number.[1] The first step to establishing a moonwell is to gain the blessings of the local wildlife. It is their goodwill that enables night elves to peacefully coexist, and a moonwell thrives on such energies. After receiving the blessings they are combined into a ritual bundle and imbue the moonwell, followed by water added from a preexisting purified moonwell. Combined with Elune's light, a moonwell can purify its surroundings for years.[2][3]

Moonwells are bound to the magic of nature and the light of Elune and are known as places of healing for both the land around them and those who drink of their waters. Magi and other spellcasters can refresh their mana in these pools — a gift from Elune to Azeroth's other defenders.[5] According to Tenaron Stormgrip in Aldrassil, the water of the moonwell is brought from the Well of Eternity, and Sentinels revere them as shrines to Elune. The night elven druids also take advantage of its properties.[6] Moonwells are used to bless food, offer protection against fire,[7] and bless Warden's Arrows.[8] Some moonwells can apparently be used to create the "liquid fire of Elune", a substance that can be poured on animal corpses to cleanse them of Scourge taint.[9] The waters of the moonwell that rests under the boughs of the Oracle Tree are said to possess the very essence of Elune's Powers.[10] Ashenvale's Moonwell of Purity is protected by Elune's power.[11]

Corrupted moonwells seem to have the ability to transform people into satyrs.[12]

Following the Argus Campaign and the destruction of Silithus, night elf priestesses and druids built moonwells there to help restore the devastated land.[13][14]

Water from moonwells can be safely drunk, but the most efficacious use for them is to bathe in the sacred waters, optionally while clad in robes. This act eases feelings of pain, weariness and grief according to Astarii Starseeker.[15]

In-game uses of a Moonwell

In World of Warcraft, moonwells are typically only cosmetic or quest and material-creation (like

[Mooncloth] and primal mooncloth) related, located mostly in night elf areas. Some newer players used to sometimes be seen standing in a moonwell after combat, with the uninformed belief that it is healing them faster (As was similar in Warcraft 3).

None of the moonwells in Draenor can be used in tailoring.

None of the moonwells on the Broken Isles can be used in tailoring.

In Warcraft III, the Moon Well was the night elven farm structure that also had the ability to heal friendly units, and it had mana that only recovered at night.

Moon wells were/are created by the night elves to harness the energy of the moon.[citation needed]

Enchanted pools throughout the Moonglade give the night elves their spiritual power and feed the Nordrassil, World Tree that stands in Hyjal Summit. The shimmering waters within give off a blue light, causing the moon wells to glow slightly in the night. They are scattered throughout the forest, often near giant standing stones covered in ancient runes.[17]

The high elves of Theramore Isle, having left mostly before the destruction of Dalaran and Quel'Thalas, have formed a significant community in the city. They spend a great deal of time hunting the few undead forces in Kalimdor. Their exposure to the night elves has caused them to develop a great interest in moon wells, which they seek to find an alternative solution to their addiction. Even the presence of a hidden moon well 50 feet away is enough to replenish their mystical energies and makes meditation unnecessary.[18]

Theramore's high elves also have another interest in the continent. They have discussed privately the creation of their own realm on Kalimdor. The northern forests, full of moon wells and lush greenery are most attractive, but their control by the night elves is overly frustrating. High elven expeditions, claiming to be tracking undead, often search for suitable sites.[19]