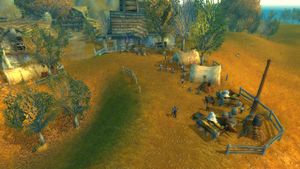 Moonbrook reclaimed after the Cataclysm.

Moonbrook mine entered by the pirates.

Moonbrook is an small town, located southwest of Sentinel Hill in Westfall. The town was formerly controlled by the Defias Brotherhood, but after its fall was reclaimed by the Westfall Brigade. It is home to a high population of homeless due to the delay of the completion of Sentinel Hill. There are also a handful of Moonbrook Thugs which are hostile to players of both factions. Although the town itself is devoid of vendors, the nearby camp to the northwest has a flightpath, vendors, and the town's protectors.

Prior to the coming of the orcs to Azeroth, Moonbrook served as the focal point of the farmlands of Westfall. During the First War, Moonbrook and its sister town Goldshire were the final two towns to fall to the Horde prior to the razing of Stormwind Keep.[1] It was rebuilt following the Alliance victory in the Second War.

One prominent family from Moonbrook is the Cooper family, who lived in a residence in the western part of the town.[2] In the school of Moonbrook you'll find the documents about it's former instructor, Stalvan Mistmantle. The nearby mine was overseen by Foreman Thistlenettle, a member of the Explorers' League.

Following successful efforts by the Defias to seize control of Westfall, Moonbrook was abandoned. For a while, it was controlled by the Defias and used by them to access their main base of operations, the Deadmines. Since the defeat of Edwin VanCleef and the fall of the Brotherhood, Moonbrook has become home to a large number of vagrants. A small Alliance outpost has been established at the edge of the town.

At some point, the area was invaded by Jerias Bloodvein of the Bloodsail Buccaneers and his pirate crew.[3]

During the Burning Legion's invasion, the area falls under the Legion's control. Its residents are enslaved by a nathrezim and are later killed by the defenders.

[15] The Dawning of a New Day, the area of Moonbrook is phased.