Moonfang Snarlers are level 99 wolves that appear in the forest of western Darkmoon Island. They start appearing when it's time for Moonfang to make her appearance. Killing most all of them will cause a zone-wide announcement of Moonfang Dreadhowls appearing. 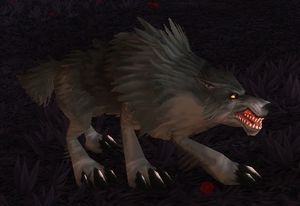 Prior to 5.4.0, these wolves served no purpose, and only a handful would be up at a time, however, they do reward a