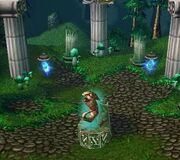 Horn of Cenarius on Moonglade Isle.

Moonglade Isle is an island in the middle of a lake in the Moonglade. The Horn of Cenarius was kept on it guarded by three Primal Guardians (spirits of ancient keepers of the grove and several owlbears). The night elf Sentinels led by Tyrande Whisperwind had to fight their way to through the Horde camped there, as well as three ancient guardians in order to get the horn so they could wake the sleeping druids.

There were three caves, likely one for each of the spirits. Near the lake, Malfurion's barrow den was located there.[1]

The isle seems to be absent from World of Warcraft, the only lake being Lake Elune'ara with no isle on it. It is unknown if Moonglade Isle was supposed to be there or if it sank, or it is just missing due in-game scale.