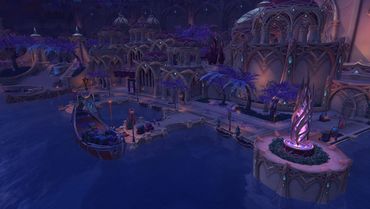 The Moonlit Landing is a large marina located on the southern edge of the Court of Stars in the nightborne capital of Suramar. As part of the Noble District, the harbor is one of the more affluent areas of the city, and services the vast majority of the nightborne nobility, who reside within the nearby districts. After Astravar Harbor, which is found just across the water to the southwest, the Moonlit Landing is the largest series of docks in Suramar, with full access to the surrounding Suramar Bay. The port's day-to-day operations appear to have been overseen by Auditor Esiel.

The marina received notable attention from the Nightfallen insurgents during their rebellion after the arrival of the Burning Legion, and the docks were placed under heavy security for the duration of the conflict. At this time, they were regularly patrolled by Duskwatch forces, magical constructs, and demons of the Burning Legion. It also possessed its own unique division of security.

The docks are accessible via a series of stairs leading down from the Gilded Market in the northwest, which also opens onto the nearby Midnight Court.

The Moonlit Landing has presumably traditionally serviced the surrounding Noble District and Court of Stars for the 10,000 years of isolation Suramar City and the nightborne people found themselves under their magical shield. However, ships and boats had only limited usefulness during this period as the shield prevented any access to waters outside the city.

When the third invasion of the Burning Legion began and Suramar City was plunged into civil war, the Moonlit Landing was used by both sides in their struggles to defeat the other. Despite the heavy security present, the Nightfallen rebels used the docks as a landing point when they infiltrated a loyalist banquet being held in the Court of Stars, early in the conflict. Utilizing a gondola for transport, the group of disguised rebels made their way from the drop-off point at the Moonlit Landing through the nearby buildings to the nearby Gilded Market, where they continued on their mission.[1]

Rebel agents also assassinated Auditor Esiel, a loyalist official in charge of the docks, as part of the conflict.[2] Elements of the powerful House Stelleris were also known to make use of the marina for their operations. When they attempted to kidnap Ailen of House Astravar as part of a power play, Nightfallen operatives raided a part of the landing and rescued the noble before he could be transported away by boat.[3] Corvelyn, a thug in the employ of House Stelleris, was also killed on the docks in a separate encounter, on the orders of the rebel-sympathizer Ly'leth Lunastre.[4]

The Moonlit Landing avoided much of the fighting in the later stages of the conflict, and was not involved in the transport of nightborne civilian prisoners to demonic bases outside the city for soul harvesting, as the nearby Astravar Harbor was.[5]