Moorabi is a boss of Gundrak, an instance in Zul'Drak. Moorabi, a Drakkari ice troll, is the former high prophet of Mam'toth, the Drakkari mammoth god. The Drakkari sacrificed Mam'toth along with their other animal gods to obtain their considerable power in the fight against the Scourge, who are swiftly encroaching upon Drakkari lands. The death of the god transferred the immense power of Mam'toth to the high prophet.

The Drakkari sought to sacrifice Mam'toth for his powers, but instead the loa destroyed himself. Despite this act, Moorabi would not be denied his god-like powers. The high prophet drank of the loa's blood and will now stop at nothing to keep Zul'Drak firmly in troll hands. 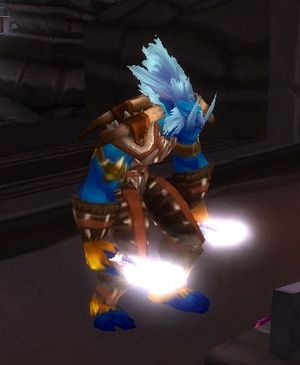 Moorabi in World of Warcraft.

State 2: The Avatar of Mam'toth

This boss is pretty straight-forward.

When you pull the boss, he will activate a buff on himself, increasing his attackspeed by 25%. Beware of damage spikes on your tank. He casts an AoE attack, Earth Shake, that increases in damage every time it's cast and stuns for 3 seconds.

The boss will try to transform into a Mammoth, but this can be interrupted. He will transform at some point in the fight, and beware of more damage on the tank and even more Earth Shakes.

With Heroic strategy the fight is typically the same. You will notice that in his normal form he will take moderate damage and dish out about the same. At 50% health he will transform into the mammoth (the cast timer quickens to the point were it cannot be interrupted). In Mammoth form he will dish out considerably more damage. However, his damage taken will be increased. It is suggested that you hold all cool-downs until this form. If your group is well geared and healer is fairly good, you might want to let him change forms right off the start and just smash him down fast.

If your group interrupts all his transformation, so that he cannot turn into mammoth form for the whole fight, you will be awarded an achievement

Less-rabi. This is also part of the meta achievement

Glory of the Hero.

The easiest way to do this achievement is to have a mage in the group. Have the other members interrupt his cast until the boss is at 35% or less health then have the mage

[Counterspell] him. You will have 8 seconds to burst him down before his next (almost instant cast).

Aggro
We fought back da Scourge! What chance joo thinkin' JOO got?

Transformation
Get ready for somethin'... much... BIGGAH!