As seen in the Legion announcement trailer.

Moose, also known as elderhorns, are large, antlered herbivores found in Highmountain on the Broken Isles and Stormsong Valley in Kul Tiras. Though they may look like gentle giants, only a fool would underestimate their strength.[1]

The Great Northern Elderhorn is one of the heartiest of the species that inhabit the slopes of Highmountain, and can survive for months in freezing blizzards.[2]

The magical Grove Wardens are guardians of peaceful, primordial groves within the Emerald Dream.[3] However, they were also some of the first to fall to the corrupting influence of the Emerald Nightmare.[4]

Moose are said to be cousins of the Highmountain tauren,[5] who frequently use them as ground mounts or cook their meat as food. At one point, moosebone was the most common material for fishhooks: solid enough to carve a barb into, but pliable enough not to break off in the mouth of a large salmon. Many tauren fishermen carved elaborate designs into their "lucky hooks".[6] The favored mount of Highmountain hunters, the Highmountain elderhorn can easily leap across the rushing rivers of Pinerock Basin even when saddled with a full-sized tauren,[7] and the tauren train the sure-footed Highmountain thunderhoof moose to safely traverse the paths and peaks of Highmountain.[8] 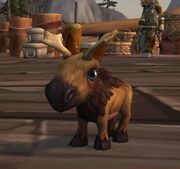 Moose are tamable by hunters as part of the stag family.

Moose are animals that are much larger relatives of elk. The mighty northern alpine moose is one of the primary prey of wolves and other predators. Orcs prefer the challenge of a moose or elk over smaller deer.[9]