For other uses, see Overlord (disambiguation).

Mor'ghor was a high-ranking fel orc of the Dragonmaw clan. In Outland, he appeared as Overlord Mor'ghor, leading the Illidari-loyal Dragonmaw operations at Netherwing Ledge in Shadowmoon Valley, as well as having ties to Sinestra, Deathwing and the black dragonflight. Years later, following the Cataclysm, he traveled back to Azeroth to seize control of the Azerothian Dragonmaws, becoming known as Warchief Mor'ghor. Eventually, however, he was killed by Warlord Zaela, Garrosh Hellscream and an adventurer, and Zaela became the new leader of the Dragonmaw clan.

Overlord Mor'ghor is the leader of the Dragonmaw clan on Netherwing Ledge in Shadowmoon Valley and oversees all operations that take place there. Mor'ghor serves under Zuluhed and Illidan Stormrage as a fel orc and aids the Illidari in collecting valuable resources from the Netherwing Ledge, much to the dismay of the Netherwing.

However, Mor'ghor still secretly serves the Black Dragonflight as is apparent from both his conversation with Lady Sinestra and the player's conversation with the Murkblood Overseer in the Netherwing Mines; although the Dragonmaw under Mor'ghor have been using much of the resources that they take from the Ledge to supply Illidan's armies, they have also been taking much of it for themselves and either selling it or giving it to the Black Dragonflight in return for mounts and the favor of the Dragonflight's master.

He offers two daily quests for the clan where the adventurer is tasked with raiding locations in Outland. However, the Aldor or Scryers will discreetly subvert one of them to trick Mor'ghor.

Mor'ghor, having fled from Outland, now resides in Dragonmaw Port, where he has become the new Warchief of the Dragonmaw clan. He is unwilling to aid the Horde in the Twilight Highlands, which - in combination with his bloodthirsty nature - leads to a rebellion led by battlemaiden Zaela which ultimately results in his death. 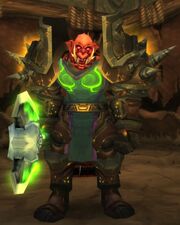 It is presumed that he is Zuluhed the Whacked’s second in command and is therefore the current Chieftain of the Dragonmaw when the player encounters him.

From his meeting with Lady Sinestra, we can assume that he was an orc of high standing during the Dragonmaw's stay at Grim Batol and also an agent of the black dragonflight during this time. It is possible that he supplied Deathwing with information on Alexstrasza and the Dragon Soul's whereabouts which eventually led to the events that took place in Day of the Dragon. However, if this is the case, it means that Mor'ghor was either not present at the The Battle of Grim Batol, having already traveled to Outland with his chieftain or he has only recently arrived there, which would mean that he survived the Dragon Queen's wrath and possibly served under Nek'rosh Skullcrusher. The latter theory is probably the more likely of the two, given Nek'rosh's connection with the Black Dragonflight. (See Dark Horde)