Moragg is an observer boss located in the Violet Hold. 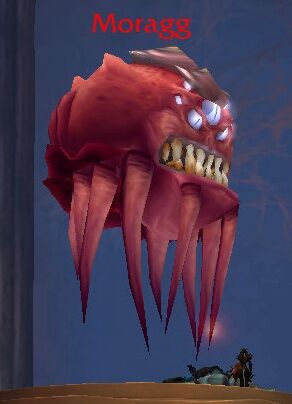 Moragg in World of Warcraft.

Cyanigosa has enlisted Moragg to help her annihilate Dalaran's renegade magi. This nightmarish demon once served the Burning Legion, eviscerating Sargeras's enemies with the baleful gaze of his seven eyes. Now he will show Azeroth's heroes that one does not simply walk into the Violet Hold...

This is a basic tank and spank boss. The only thing that tanks may need to pay attention to is the occasional spell critical on the tank; these hit for 5k damage at most and should simply be healed through. The party should generally stay as close to the boss as possible to avoid Optic Link deaths.

If your party wipes after defeating Moragg, he will be replaced with the Chaos Watcher during subsequent attempts.

Moragg appears as one of the bosses that can be encountered in the Dalaran Heist single-player experience in the Rise of Shadows expansion for Hearthstone.