Not to be confused with Morbent Fell.

Morbent Fel was a level 32 named human necromancer who ruled over the undead of Duskwood from his homely house atop the Forlorn Rowe in Raven Hill Cemetery. He was guarded by his undead minions as well as a magical barrier that dampened attacks on his person.

In order to defeat him, one had to first remove his magical shield using

[Morbent's Bane].[1] He was very hard to hit with the shield active (unless one was of a significantly higher level than him) and the quest objective to kill him would not be completed.

After the Cataclysm, Morbent Fel returned as a lich (likely in homage to the similarly-named random hero lich from Warcraft III)[2] and was defeated once again. 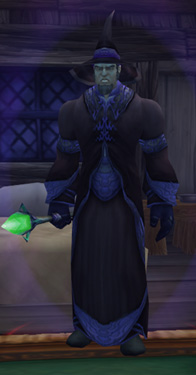 Judging by the surname, he can be related to Jasper Fel.