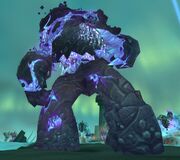 Morchok is the first boss to appear in the Dragon Soul raid.[1]

The most powerful elemental still under Deathwing's sway, Morchok - once a passive guardian - is now convinced that his only respite will come with Azeroth's demise. Morchok rages against the foundation of Wyrmrest Temple, Azeroth's last beacon of hope in the Hour of Twilight.

Two tanks are required for this fight. Morchok will constantly use 'Crush Armor' on his current target. To remove this, simply have the off-tank taunt when the tank gets the first application and then just continue to tank-swap when the debuff fades off.

Everybody in the group needs to stay close to the boss in order to spread his 'Stomp' ability's damage evenly, but the two tanks must ALWAYS be the closest to him as the two closest targets will take double damage.

After two Resonating Crystals explode, Morchok will engage Phase 2. Morchok will draw everyone to him, stunning everyone and dealing minor AoE damage. He will also drop spikes everywhere around him. Once the stun wears off, everyone must run to one of these spikes and hide behind them, making sure they stay out of the black blood he spreads everywhere. If you stand in this blood for too long, you will die. Once he finishes channeling the blood, he will immediately stomp, so no one should run back in until he casts this or players will very likely die. When he finishes his stomp, everyone should hug the boss (the two tanks still being closest to him) and repeat Phase 1.

At 20% health, Morchok will enrage and deal a lot more damage. All major cooldowns should be saved for this phase as the damage he deals becomes quite high.

Shortly after the first stomp Morchok splits into two bosses (the new one is named Kohcrom, how imaginative). Since both bosses do Stomp and Resonating Crystal, it is best to separate them, with one 5-man team responsible for each of the two bosses. In order to have enough space for the fight you will have to clear some trash on either side of the lane that is usually ignored in normal mode.

Splitting the raid also means that a non-tank will endure the enhanced Stomp damage from being closest to the tank. Assign a specific player with good movement ability and survivability the job of stacking on the tank so that the damage will be predictable. The other 3 members of the 5-man team will have to stack on the Resonating Crystal to minimize the damage. To make sure that all of the 5-man team is in range of the stomp, the tank should run toward the resonating crystal as soon as it spawns. Positioning the boss close to the crystal is necessary if there are any melee players in the team.

The bosses typically toss their resonating crystals farther and farther from the starting point of the battle. The black blood phase is a convenient time for the team to retreat to the center of the battlefield, reset Morchok's position, and prevent the battle from creeping into adds.

Do not be afraid to experiment with a 3-healer or 4-healer setup.

Each boss in the instance has their own drops and a table of shared items that can drop off any boss except for both Deathwing encounters.

1st group of mobs killed/Intro
Morchok yells: No mortal shall turn me from my task!
Lord Afrasastrasz yells: Wyrmrest Accord, attack!
Image of Tyrygosa yells: They have broken our defenses! The very earth turns against us in Deathwing's name.
Image of Tyrygosa yells: You must hurry...Wyrmrest falls as we speak. All...is lost.
Lord Afrasastrasz yells: Tyrygosa yet lives! We must press on, to the Temple!
Morchok yells: Cowards! Weaklings! Come down and fight or I will bring you down!

2nd group of mobs killed
Morchok yells: Wyrmrest will fall. All will be dust.
Lord Afrasastrasz yells: Advance to the front! The siege must be broken! Wyrmrest Accord, defend the line!
Morchok yells: I will turn this tower to rubble and scatter it across the wastes.

Aggro
You seek to halt an avalanche. I will bury you.

Summon Kohcrom
You thought to fight me alone? The earth splits to swallow and crush you.

Black Blood of the Earth

Death
Morchok yells: Impossible. This cannot be. The tower...must...fall.
Lord Afasastrasz yells: The Twilight's Hammer is retreating! The temple is ours; fortify your positions within!

Unused quote
You cannot hide in this temple forever, shaman!