Not to be confused with Mort'regar. 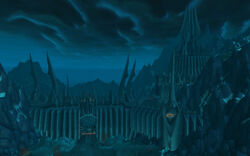 Mord'rethar: The Death Gate is the first line of defense used by the Scourge in Icecrown. Behind this gate lies the Valley of Lost Hope.

In the assault on Icecrown, Horde forces dishonorably attacked Alliance forces who were busy fighting the Scourge at the Broken Front and trying to capture this gate.[1]

In order to destroy Icecrown Citadel, the gates in Icecrown must first be taken.[2] This is why players of both the Alliance and Horde are sent to sabotage these gates, so the army can conquer the gates. These quests are either given by Koltira Deathweaver or Thassarian, depending on one's faction, and involve killing Pustulent Horrors and throwing their spines into plague cauldrons to turn the plague into corrosive acid (the latter is better for the troops than the first, according to the death knights[3]), as well as taking out a powerful zombie, Coprous the Defiled.

After the player has completed these quests, the Death Knight quest giver deems the assault by the big army on the gate to be doable, and sends the player to Aldur'thar: The Desolation Gate.

With the role of the Lich King now destroyed, the Cult of the Damned congregated at Mord'rethar under the control of Herald Dalora, a Mawsworn servant of the Jailer.