Archmage Mordent Evenshade is the leader of the Shen'dralar Highborne that have reintegrated into night elven society.[2]

Before the Cataclysm he could be found in the lower level of the Temple of the Moon, seeking an audience with Tyrande Whisperwind to accept the Highborne into society. He was debating with Sentinel Stillbough.

Mordent and his Shen'dralar mages rejoined night elven society.[3] He can be found at the Howling Oak in Darnassus. He is a mage trainer, but only trains night elves.

Mordent had a hard time as his Highborne mages were murdered in Darnassus. Mordent and his followers were called to a meeting with Maiev, who was examining the murders. However, it turned out to be a trap as the Highborne got trapped in Maiev's magic trap and learned Maiev was the one actually causing the murders. One of Mordent's students, Var'dyn Skyseeker, got killed in the trap. Thanks to the efforts of Malfurion Stormrage and Jarod Shadowsong, the Highborne were freed, though Maiev escaped. 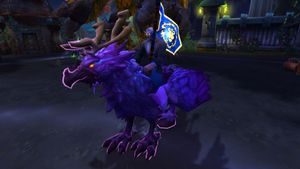 Mordent during the Battle for Darkshore.

Following the Burning of Teldrassil, he was encountered by the Horde troops inside the Blackfathom Deeps.[4] He later participated in the Battle for Darkshore, where he was stationed at Ashwood Depot. He ordered the Alliance adventurers to deliver

[Evenshade's Note] to Maiev Shadowsong in Bashal'Aran.[5] After his arcane hippogryph was killed, Mordent teleported himself away.

The magic of today pales in comparison to that of millennia past. Still, we Highborne know much of the arcane. Are you ready to learn?

I suppose I should not be surprised at this cold reception. We have long been in our hiding, and the separation from our brethren was necessary.

That time, however, is done. Whether the residents of this young tree come to accept us or not, the Highborne are returning to light, and we will not turn our backs on what we are.