Report to Vol'jin at Darkspear Hold.

Ya definitely more den expected, mon. I'm sure dere's more important stuff we can be usin' ya talents on now. Ya don't need ta hang out with da newbloods no more.

Head down to da village to da southeast and make yaself known. Lend a hand here and there and I'm sure ya make yer way up to sometin' more prestigious quick enough. 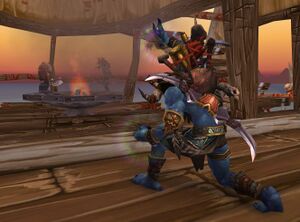 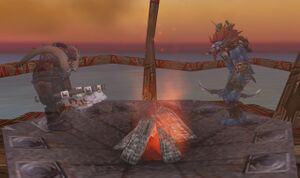 The quest giver depends on your class.

Vol'jin shows a vision of himself and Garrosh Hellscream, the new Warchief of the Horde, talking in a previous encounter in Grommash Hold, using some sort of incense over a brazier.

After the vision ends, players can speak to Vol'jin to watch it again from the beginning.

I will see ta it personally dat the Darkspear rise as a power in their own right.

Can you tell me of the time when the Darkspear left Orgrimmar, Vol'jin? I need to see Garrosh's actions for myself.