For the boss encounters, see Moroes (tactics) and Moroes (Return to Karazhan tactics).

Moroes is Karazhan's steward and can be found tending to guests in the Banquet Hall in Karazhan.

He was aware of his undead state and of being mysteriously revived over and over. If he had his preference, he would like to die permanently.

Moroes was a friend of Aegwynn, the Guardian of Tirisfal before Medivh. He agreed to stay with Medivh and help maintain Karazhan, becoming Medivh's castellan. He had always disapproved of the way Aegwynn insisted on detaching herself from the world. As the darkness within Medivh began to grow and the Guardian's isolation was blamed as the cause, Moroes suggested that, if he could not trust the Kirin Tor and Council of Tirisfal, he could invite people from the regions surrounding Karazhan for a banquet instead. Surely they could not have ulterior motives other than curiosity, and the company would do him good. In the years to follow, Medivh would host many galas and his mood did indeed improve.[2]

During one such gala after Medivh opened the Dark Portal, Aegwynn arrived and confronted her son only to learn he was possessed by Sargeras. During their magical duel, Sargeras ripped the lives out of the hundreds of guests fleeing Karazhan with only Moroes spared. Afterward, Moroes seemed driven half-mad by what he had witnessed. Medivh - unaware of the full truth of what happened while Sargeras controlled him during the duel and thinking the guests' death was an accident - tried to ease Moroes's pain by erasing the memories of the event. But even so, Moroes was never the same again.[3]

Moroes was described an oddly thin man, too thin. It made Khadgar think Medivh mutated animals to serve him. He was also ghostly in appearance, who wore horse blinders over his eyes in order to escape the wandering visions that plagued Medivh's tower. He described to Khadgar (who had traveled from Dalaran to serve as Medivh's apprentice) how he had seen a vision of himself breaking one of Cook's crystal dishes and — despite trying to avoid doing so — ended up shattering it anyway; he wore the blinders until the day he died. When Khadgar and Garona revealed the truth about Medivh, the apprentice told Moroes to take Cook and leave the tower. He gave them a whistle to summon a gryphon but did not leave as he had nowhere to go. He was killed by Medivh, who was in the final stages of madness, and was buried beside both his master and Cook at Morgan's Plot outside of Karazhan.[4][5] It seemed that Moroes wasn't surprised that he was murdered by Medivh.[6]

Moroes in World of Warcraft.

He is one of the first bosses encountered by adventurers. He has been revived as an undead and wields two wicked daggers when attacking. He seems to have retained much of his personality during life since after wiping the raid he states Medivh will return from Stormwind City.

The party he "holds" in the tower's Banquet Hall includes ghosts of relatives of Darkshire noblemen as guests. Names of all of the NPCs in the Hall, including Ebonlocke who refuses to take part in the festivities, can be found as names of notable citizens of the Duskwood town.

Moroes attacked Lieren and Loania at some point.[7]

Moroes is one of many possible old characters who can appear at the inn at the Garrison. After years of being killed only to be revived by some unseen force again and again, the chiefest of Moroes's many desires is now the comfort of true death.

He will settle, however, for a

[Horribly Acidic Solution] from the Iron Docks to help him clean the scuff marks left behind by adventurers in the Karazhan dining hall. In exchange, Moroes provides some of his famous polish. He starts 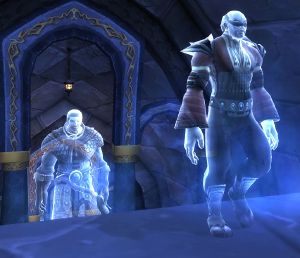 Moroes in a Vision.

A vision of Moroes makes a cameo in Karazhan, offering a young Khadgar blinders just as in The Last Guardian, when Khadgar reminisces of his apprenticeship under Medivh.[8]

Some time later, Moroes is overlooking the ruined village and killed Apprentice Darius, while noticing the Legion forces marching into the tower. Moroes recognizes it as a sign of Medivh's return and the demons entered into the tower.

Within Karazhan, he comments that the master has not been himself of late and would think of "drown his sorrows" would make him feel better. Unfortunately, he was slain by the adventurers once again and said that it was an honor to serve.

[Broken Pocket Watch] and in order to attempt to free him from this curse, the hero has to do various tasks at their order hall in order to set up a meal at Morgan's Plot for the dinner party.[9] After the table is set up, the player rings the

[Master's Bell] to call on the butler and tells him that his master is dead and no longer does he need to serve him. Moroes explains that the master still controls his physical body but the player says that his spirit is free to do what it wills.[10] He then questions them if they need a servant, they said yes but not as a servant.

May I take your cloak? No? Very well, commander. The commander is, of course, welcome to continue dripping mud all over the floor that I have spent just this morning polishing.

In Greek mythology, Moros ("doom", "fate") is the personification of impending doom, who drives every being, mortal or otherwise, to its fated doom. 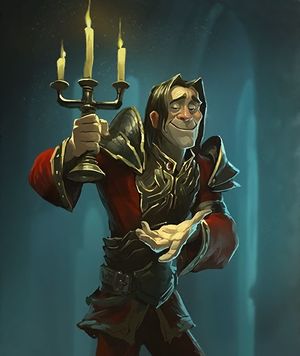 Moroes when he as alive in Hearthstone: One Night in Karazhan.

Moroes from a separate timeline[11] appears in the Warcraft film universe.