For the character from the main universe, see Moroes.

Moroes was the assistant of the Guardians of Azeroth and castellan[1] of Karazhan, and a member of the Kirin Tor. He was killed by a fel-corrupted Medivh shortly before his master's death.

Old beyond reckoning, Moroes had taken care of many Guardians before his death.[2] Despite this his appearance was ageless, straight-backed and muscular, albeit pale of face and hair.[3] 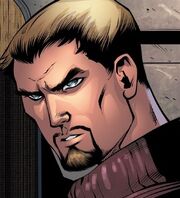 Moroes in Bonds of Brotherhood.

When Medivh completed his training as the Guardian of Azeroth in Dalaran, he was sent to the Tower of Karazhan where he was greeted by Moroes. Medivh asked him about the fel but the castellan said he couldn't help him. In fact, Moroes knew about the fel because he assisted a previous Guardian, Quelen, who researched it. Medivh discovered this and Moroes admitted it. He told him that the fel made Quelen mad, but as he believed in Medivh's strength of will, a thing Quelen lacked, the castellan gave him Quelen's research on the fel. Several months later, he prepared a gryphon for Medivh who was to join the Stormwind army against the invading trolls in Brightwood. While setting off, Moroes inquired about the fel research and offered the Guardian help. Medivh stated that the research will take years.[4]

When the arrival of the orcs on Azeroth led Lothar and Khadgar to Karazhan to summon Medivh, Moroes greeted them and guided them to his master, but as Medivh's exertions in battling the fel began to take their toll, Moroes pleaded with the Guardian to cease his travels to aid the forces of Stormwind, and instead stay within the tower.

Moroes had known of his master's struggles with the fel for some time, and would aid him in recovering each time, believing that he would continue to succeed in mastering the corruption.[2] After the tower's community of servants was sent away, Moroes did not seem entirely happy with his master's isolation, commenting on the arrival of Lothar that his familiar face would do the Guardian good.[5]

Despite his efforts to aid and assist his master, Moroes was unable to prevent Medivh from succumbing to the fel, although he did provide one last service, his soul being drained by the Guardian and used as fuel in the ritual to open the Azeroth side of the Dark Portal. Horrified by the final corruption of his master, Moroes' last wish was that he had died before the moment had ever come.[2]

Since he was affiliated with Kirin Tor, he could probably also be a mage but that's not stated or shown.