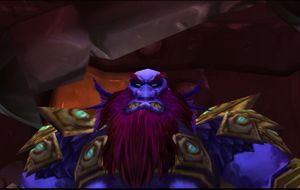 No resistance gear is needed. Raid members with 9k health or more can survive a combination of earthquake and watery grave without being healed - this is nice to have, but not absolutely necessary.

This fight is aggro sensitive, thus

[Blessing of Salvation] and

The raid should stay well away from the waterfalls, so that nobody takes collateral damage from watery graves. A good spot is on top of the stairs to the next room. It's possible to sneak past the boss and pull him from there. Morogrim should be tanked upstairs on the platform. Two healers should be designated to take care of the watery grave victims and set up downstairs, the paladin tank, a "heal aggro" warlock and a healer for the paladin can set up at the bottom of the stairs too.

The raid sets up at the edge of the platform on top of the stairs, so that the ranged damage dealers can switch from Morogrim to the murlocs just by rotating in place.

The main problem in this fight is to control the murlocs after the earthquakes. All raid members must be careful not to draw murloc aggro, particularly healers should resist their urge to immediately get the earthquake damage under control. After the tanks have solid aggro, the murlocs are killed by AoE and/or

A paladin is the best choice to tank the murlocs, he should need only about 5 seconds to build solid aggro on all murlocs. To maximize the paladins healing aggro, one warlock can be designated as heal target for him. That warlock should Lifetap to keep his health low, and since warlocks can increase the healing they receive, spamming max rank

In this case a few druids and/or warriors have to do the job. To give them more time to build aggro, the murlocs can be slowed down with Frost Trap,

If none of the above two methods work, it's also possible to use the healers as a sort of kiters. The mages and warlocks set up an AoE kill zone north of the stairs. All healers stay directly south of that zone, and spam heal like mad. The murlocs spawning in the north run through the kill zone when trying to reach the healers, and simply die. When all northern murlocs are dead, the healers move through the AoE to the north, so that the southern murloc group meets the same fate.

When Morogrim starts to summon these, the raid should just reposition out of globule range (inside the doorway to the next room). Globules damage can be entirely avoided. His next ability is Tidal Wave, which deals unavoidable damage and inflicts a de-buff that reduces attack speed by 400%. This is particularly debilitating to Death Knights, as it seriously slows their rune regeneration rate.

This is a relatively simple encounter, with little damage being taken by the player.

As Morogrim does not target the person highest on the threat list with Watery Grave, that spell is never cast when players solo him.

He will occasionally cast Earthquake, dealing unavoidable damage and attracting the attention of packs of murlocs. Simply use AoE on the murlocs and continue attacking Morogrim.

When he reaches 25% health, he will start summoning Watery Globules that will move towards you and burst for 6000 damage each. Simply kite Morogrim away from the Watery Globules, deal with incoming murlocs and continue to whittle down his health.

Aggro
Flood of the Deep, take you!

World of Strats Tactics and videos