Mortars are a type of siege weapon that resembles a cannon. They are operated by mortar teams. They were used extensively as siege weapons by the Alliance of Lordaeron during the Third War. Ammo is called mortar shells.[1][2]

Mortars launch a grenadelike weapon such as an explosive shell in a high arc to land near or on a target.[3] 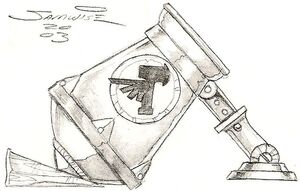 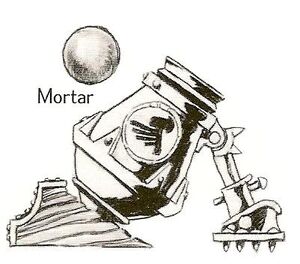 Mortars are used by the dwarven armies of Khaz Modan as a mobile form of artillery, when cannons simply cannot be rolled in.[citation needed]  Dwarven Mortar teams consist of a carrier/gunner and a spotter/loader. They are well known for their battlecry, "MORTAR COMBAT!" (a reference to the video game Mortal Kombat), and their advice to targets within earshot: "Hey, you! Catch!"

From the time the dwarves first learned to use mortars to the present day, there have been only 3 reported cases of the enemy being stupid enough to actually try catching the shell, with a successful catch being made only once. The name of the individual who performed this impressive feat has been lost, along with most of his anatomy and all insect and plant life in a 15-foot radius of the place where he was standing.[citation needed]

It is an explosive weapon only Engineers can use or craft that produces a Ground Targeted Area of Effect. When mortars are used, a green targetting symbol appears on the ground that can be moved around. The targetting symbol becomes a red 'no' symbol when moved out of range. After acquiring a valid target, click to fire the mortar. The table below summarizes the variety of mortars available to Engineers; skill required and effects.