Morthis Whisperwing is a night elf druid and a member of the Druids of the Talon.

[Swift Flight Form] instructing the adventurers to kill Anzu. This quest chain has since been removed.

After the Shattering he was sent by Malfurion Stormrage as a scout, to investigate the status of the night elf holdings on Kalimdor. When he returned to Darnassus, he reported the situation to the co-leaders of the night elves.[1]

He stayed on Azeroth and can now be found at the Shrine of Aviana in Mount Hyjal. He remembers all druids that he has taught. When the druids attacked Firelands, he moved to Sanctuary of Malorne and from there he entered the Firelands.

He is later seen in Lunarfall in Draenor. 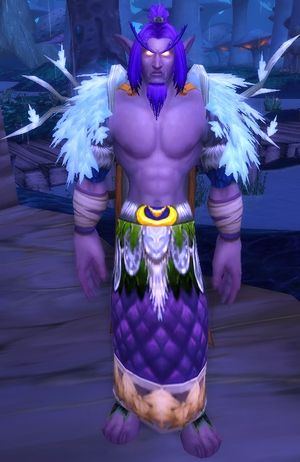 In a way, I envy the freedom Rook and Corvax enjoy. To be free of earthbound responsibilities is a great blessing indeed.

The future will see me on wing once more, but first there's a task I must complete.

Welcome the Shrine of Aviana, <class>. Here we sit atop the world and touch the sky.

Ah, <name>! We meet once more. I helped you attain your swift flight form in Outland.

<Morthis tightens his jaw and shakes his head, his withered eyes sad.>

These young druids today... they have it too easy.