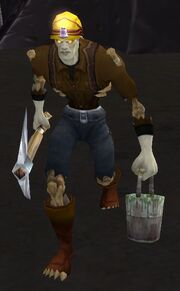 Foreman Mortuus in the Borean Tundra.

Mortuus first appeared as Foreman Mortuus at Warsong Hold in the Borean Tundra as part of the Warsong Offensive, sending Horde adventurers to free Warsong Peons captured by the Scourge. Following the Cataclysm, he received a promotion to the rank of Grand Executor Mortuus at the Forsaken High Command in Silverpine Forest alongside Queen Sylvanas. He expresses optimism that Warchief Garrosh's stance on the Val'kyr will improve.

Given the fact that Mortuus is "Grand Executor", he may be the leader of the executors.