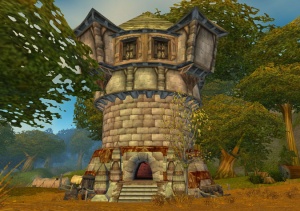 Mortwake's Tower, formerly Klaven's Tower (named after its rogue Defias master Klaven Mortwake) lies at the southeastern edge of Westfall near the river and north of the Dagger Hills.

SI:7 was previously scouting this mage tower (which was then identified as a watch tower[1]) for some time and sometimes covertly sought help from adventurous rogues to sneak in and gather intelligence. It is such a well known launching point for Defias activity that it has also been called simply the "Defias Tower". Klaven's Tower was being used, along with Jerod's Landing in Elwynn Forest, in the smuggling of stolen goods from Redridge Mountains.[1]

Due to the fumes of the various troll poisons used by Mortwake, the inhabitants of the tower were especially weak to sneak attacks.[2]

In Cataclysm this tower was renamed to Mortwake's Tower, though it is not immediately clear why. With the removal for the most part of class-specific quests, its primary purpose is for the quest