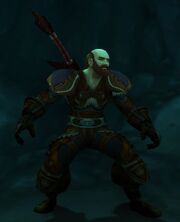 Mostrasz in a cave outside of Ravenholdt Manor.

Mostrasz is a red dragon in human guise at the Vermillion Redoubt, helping players to find the stolen black dragon egg. As he and a rogue adventurer infiltrated Ravenholdt Manor, they are both discovered. Wrathion commanded Mostrasz to deliver a message for the red dragonflight, that he is going to be free. Before leaving, Fahrad broke his legs. He alongside others Ravenhold Attackers attacked Ravenholdt Manor, but were killed by Ravenholdt Sentry. Mostrasz was killed by Wrathion himself.

The Vermillion Redoubt is our base of operations here in the Twilight Highlands.

From this perch we can supervise the assault on Grim Batol and the cleansing of the river valley below.