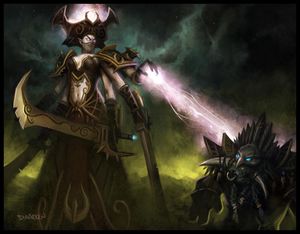 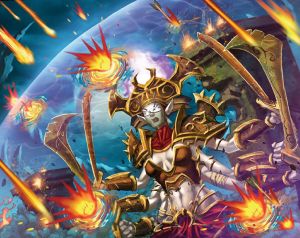 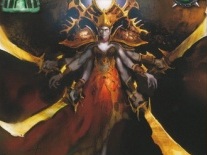 Mother Shahraz in the TCG. 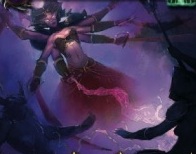 Mother Shahraz is a shivarra boss located in the Den of Mortal Delights in theBlack Temple. Besides requiring high amounts of Shadow Resistance, the fight is rather basic tank and spank. All previous bosses (Shade of Akama, Teron Gorefiend, Reliquary of Souls, and Gurtogg Bloodboil) need to be killed before the door to Mother Shahraz opens. She must be killed before the raid can gain access to the Illidari Council. Given her location, quotes, and abilities, it can be surmised that she is the leader of the concubines in Black Temple and probably even a concubine herself.

Mother Shahraz will link allies together with Fatal Attraction while also dealing heavy damage to the raid with her Beams.

[Medallion of Karabor]. The

[Shadow Protection] buff is mandatory, a

[Cauldron of Major Shadow Protection] can help too. The fight is very mana intensive for healers.

Everybody should have a

After the universal nerfing of TBC raid contents in patch 3.0.2, she can be brought down without any shadow resistance gear provided the DPS and Healing are good.

Three tanks must stand close together in front of her to distribute the Saber Lash damage. She must face away from the raid, the melee group sets up behind her. Ranged and healers set up in one big group. It's a good idea to have the raid stand under the right-hand pillar, and the melee group with the boss at the opposite pillar, because the lower ceiling there somewhat reduces falling damage.

The encounter can be reset by running to the rear of the room (away from her platform).

This ability is the most frequent cause for wipes, one common wipe situation occurs when the FA targets are teleported into the melee group, and a Saber Lash happens at the same time. There is some evidence that the beams and FA not only target players, but also totems. It's therefore a very good idea if all shamans continuously keep up four totems. One healer should be predesignated as FA target healer, and spam heal the affected players. They must move apart very quickly, and try not to hurt too many other raid members. This is easier said than done, because often enough two players run in the same direction, both thinking due to lag that the other guy was "behind" and should break off, while in reality they're just close together, and each see themself as being "first". Good communication between the FA targets is essential.

A one-group setup as described above has the disadvantage that the FA targets can be teleported into that one group, and then a lot of AoE damage is taken. By setting up in several (up to four) smaller groups, the number of people affected by the AoE is smaller, while the probability of having some people affected by it increases. Overall, distributed setups have the disadvantage that FA targets have problems to find safe spots to run to.

When the whole raid clusters very close to her ("under her skirt"), nobody can be hit by the beams. The problem is that if only one person does not stand close enough, a wipe is highly probable.

This will cause everyone to be affected by the silence, including healers.

Mother Shahraz can be a nightmare for casters, as she will close in and use her 10-second Silence ability, thus giving her that amount of time to do damage without reprisal. Casters should blow any damage-enhancing cooldowns at the start of the encounter, stack any DOTs available between silences, and use any healing or damage-mitigating abilities they have available to give them more time to get the kill.

Aggro
So... business or pleasure?

Enraged
Mother Shahraz goes into a frenzy!
Stop toying with my emotions!

For Killmovies of this encounter, see the Bosskill Movies page.