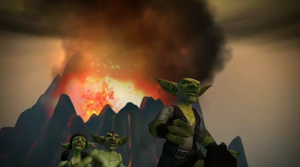 Mount Kajaro from the Cataclysm trailer. 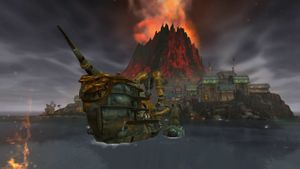 Mount Kajaro is a still-active volcano on the Isle of Kezan. According to Al'tabim the All-Seeing, Kajaro is an area plagued by volatility - marked by violent and oftentimes magical volcanic eruptions.[1] Kaja'mite was mined underneath it.[2] The Undermine is believed to be situated deep in the bowels of the mountain.[3]

During the Cataclysm, Deathwing attacked Mount Kajaro, setting it alight, causing it to become active again and later erupt,[4] destroying Bilgewater Port and possibly other parts of the island.

Jastor Gallywix considers it a possibility that his cartel's deep digging into Kezan may have contributed to the volcano's eruption.[5]

Mount Kajaro in Lands of Mystery.

Mount Kajaro is the most recognizable mountain on Kezan, and is a landmark for ships and ﬂying travelers. It is a volcano, and still active. Kajaro is sacred to Kezan's jungle trolls, and it is their last holdout on the island. They have one small settlement near the mountain: Voodress Village. Kajaro's volcanic and tectonic activity created the tunnels that house Undermine.[6] 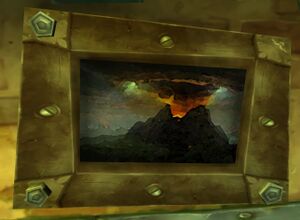