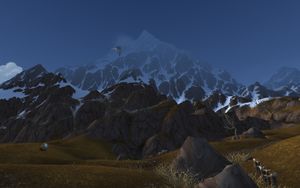 Mount Neverest from the south at Kota Basecamp

From the Neverest Basecamp, the Seeker's Folly begins, passing by endless falling snowballs and vortexes to reach Seeker's Point. From there, the path continues, unnamed, up to Neverest Pinnacle.

During the rise of the mogu empire, Lei Shen defeated Xuen and had him bound atop Mount Neverest, forced to watch the pandaren being led into an era of slavery that would last for thousands of years. For millennia, Xuen was alone, able to do nothing but watch the mogu empire inflict unforgivable cruelty on its slaves. Then he saw the seeds of revolution take hold. Then, the pandaren Kang learned how to fight without weapons, using the strength of his opponents against them, and taught it to many others. Soon he and his followers escaped to Kun-Lai, where they honed their abilities and philosophies in secret. One day Kang climbed to the top of Mount Neverest to meditate, and instead found Xuen. The White Tiger's isolation had not made him angry or bitter. It had simply made him eager to help. He guided Kang and the other novice monks in the ways of strength-not simply the strength of raw power, but the strength of endurance.[2] 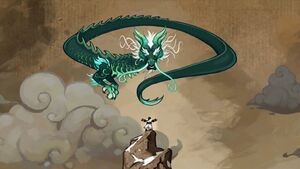 Two thousand years later, during the War of the Ancients shortly before the Great Sundering, the newly crowned Emperor Shaohao ascended Mount Neverest, seeking wisdom from the Jade Serpent Yu'lon about what to do with the coming of the Burning Legion and how to save his kingdom. She appeared and responded that he should seek out the heart of Pandaria to find the answer as well as to free himself of negative burdens. With that, she vanished, and Shaohao set out on a journey across Pandaria.[3]