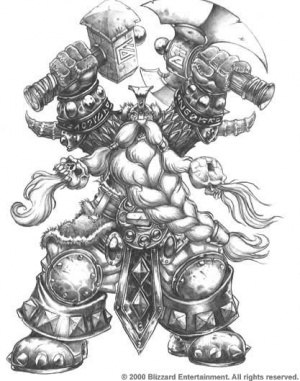 The mountain kings, or thanes as they are known in Khaz Modan, are the mightiest dwarven warriors under the mountain. Wielding both enchanted warhammers and hand axes, these fierce fighters live to test themselves against worthy opponents. Unconcerned with their race's preoccupation with mechanical devices and mining precious minerals, Mountain Kings live only for battle. Dedicated to safeguarding the Alliance which saved their kingdom during the Second War, the mountain Kings can be counted upon to rally behind any banner that stands between freedom and the ever looming shadow of evil.[1]

During the Third War they served the Alliance in various battles. For more information see: Random mountain king.

The mountain kings are honorary thanes, although not true kings. They are individual leaders of the many dwarf clan as explained by a Wildhammer NPC in Aerie Peak, and all still hail to the High Thane, the king.[citation needed]  King Magni Bronzebeard of the Bronzebeard dwarves is a mountain king.[2]

The Dark Iron Thanes all use the Avatar ability.

[120] Return of the Warrior King
Anduin Wrynn says: No, Magni. Fearbreaker belongs in the hands of a Mountain King. 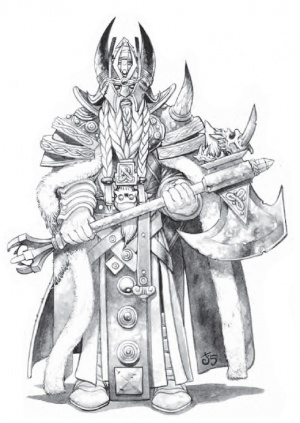 The most respected and revered of the Ironforge dwarves' warriors, mountain kings represent mighty champions of their race. While some Ironforge dwarves are enamored of the new firearms, and others unlock the secrets of their titan heritage, mountain kings continue a legacy that has existed for millennia. This is a legacy of beer, blood, booze, and thunder, of red-glinting axes and crushing hammers. It is a legacy continued by some of Ironforge's renowned heroes, including Muradin Bronzebeard, presumed deceased brother of King Magni Bronzebeard of Ironforge.

Mountain kings boast prodigious combat abilities. They are ferocious in melee combat, wielding the traditional weapons of their race to decimate their foes. Their attacks leave opponents stunned and reeling. While they do not focus their efforts on discovering the secrets of the titans, they have long known of a powerful spark within every Ironforge dwarf - and mountain kings draw upon this spark and fan it into a raging flame. They conjure magic hammers and axes to hurl at their targets, stunning and slowing them so they can get close enough to use their real weapons. They transform themselves into silver-sheened creatures of living stone, shrugging off all attacks and hacking through flesh and bone with frightening ease.

Mountain kings are champions of Ironforge, and as such they protect Ironforge's interests. Some remain in Khaz Modan, protecting their homelands from the depredations of trolls, troggs, and worse creatures. Others travel the world searching for the foes of Ironforge and, by extension, the Alliance — demons, undead, Dark Iron dwarves, troggs, and ice trolls. They are crusaders for their race, stamping out their enemies before they have a chance to strike at Ironforge or Stormwind. Other mountain kings travel the world on missions provided by their king, the Explorers' Guild, other patrons, or perhaps themselves.

Mountain kings have a tradition of proving themselves against mighty foes. Some Mountain kings fall to dragons, demons, or other ferocious creatures, but mountain kings are famous for overcoming these challenges and then seeking out another, even mightier beast. Mountain kings live only for battle; they are unconcerned with their race's preoccupation with technological gadgets, with mining precious materials, or with crafting great weapons. They feel a debt to the Alliance, which saved their kingdom during the Second War. Wherever the banner is raised against the forces of evil, there stand mountain kings, gripping their axes, slugging back ale, and loudly asking why the battle has yet to begin.

Ironforge dwarves also call mountain kings "thanes," an honorary title that respects the mighty warriors' prowess and strength. This moniker also recalls the day when most, if not all, mountain kings truly were kings of the mountains, leading the dwarf clans in the deep caves. In modern times, Ironforge has a single king - but many mountain kings are nobles or other honorary personages, the scions of families whose names and deeds echo through the generations. Other mountain kings are the first of their kith to attain such greatness, and look to carve their names into Ironforge's history.

Though they willingly battle under any circumstances, mountain kings spent much time in their people’s tunnels and are adept at fighting in the dark places below the earth. Mountain kings are more than proficient with their ancestral weapons — axes and hammers. They draw upon their traditions and ancient techniques to enhance the deadly powers of these weapons, finding vulnerable areas and swinging with extreme force and from the appropriate angle to add extra oomph to their blows. A mountain king can strike so hard he sends his opponents reeling with the power of his blows. The mountain king can use storm hammers as a spell-like ability. The mountain king can use thunderclap. Mountain kings have learned tricks with their axes and hammers to enable them to strike past their opponents’ defenses. The mountain king’s blows are so strong that he leaves his opponents dazed and unable to act. Through his internal drive and the titan forces that reside in all Ironforge dwarves, the mountain king is able to turn his flesh to stone.

Mountain kings are Ironforge dwarves only. Some speculate that Dark Iron dwarves may have their own, perverted version of this heritage.[4]

Any mountain kings who leave the Alliance are branded as traitors and outcasts.[4]

Judging by his title, the independent dark dwarf Mountain-Lord Rendan might be a mountain king too.