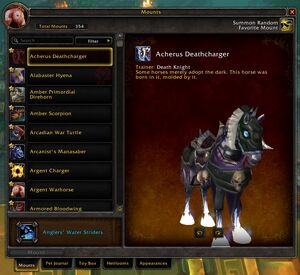 The Mounts tab or Mount Journal is a window tab found in the Collections interface that allows players to sort, inspect and summon their mounts. The Mounts tab lists all mounts, collected and uncollected.

The interface lists all mounts, with those not currently collected greyed out and listed after those collected. Mounts the character is unable to use are displayed in red, and faction mounts are marked with faction icon watermarks.

The list can be searched using a search field, or filtered in various ways. The total number of mounts collected is listed.

Selecting a mount will display it in full detail, with the option to spin and turn the mount. Flavor text is presented for each, along with information on obtaining it, stating the vendor, achievement or profession that rewards it. Additional information such as cost or zone is also shown. When multiple sources exist, each is listed.

Mousing over a mount's icon will show its tooltip, and right-clicking on a mount's icon or name in the list will allow the player to mark it as a favorite, placing it at the top of the list and making it eligible for the Summon Random Favorite Mount function. Favorite mounts are marked with a star, and are placed in alphabetical order above other mounts.

At the bottom of the interface, the Mount button causes the player to summon the selected mount. At the top right, the Summon Random Favorite Mount button will summon a random selection from the player's current favorites. Players can also drag mount icons to their action bars for more convenient summoning.