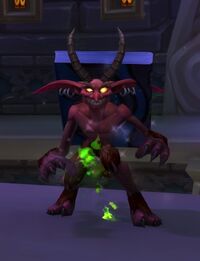 Sneaky Imp
"Catch the imp and recover the Grimoire of Arcane Ways!"

Chase down the Sneaky Imp and recover the Grimoire of Arcane Ways.

Sorry about the holographic projection... I literally need to be in two places at once these days.

A holy barrier that protects against fel magic, you say? I have just the thing to bypass it and enable Malevolence's teleport.

<The high elf rummages around in his pack, a shocked look quickly coming over his face.>

Sneaky! Look there... that imp just made off with it!

I'll make sure to give the grimoire to Malevolence so that she can unravel its mysteries.

Meanwhile, we have some Black Temple scouting to conduct.

The demon hunter adventurer chases the imp to the entryway of the Violet Citadel. The imp attempts to escape through a portal, but is interrupted by the adventurer. It continues to flee.
Archmage Khadgar says: An imp? What's going on here, <name>?

Continue to the outside and down the stairs, when suddenly...

Varedis Felsoul says: Do you think we don't know what you're up to, <name>?
Caria Felsoul says: The Illidari believe themselves untouchable. They will soon learn better.

Head to the nearby Wonderworks and inspect a Suspicious-Looking Crate.

Jepetto Joybuzz says: Oh, goodie. A new box of toys!
Green smoke emits from the crate briefly, then the crate moves until it's outside. The imp then leaves the crate and continues running.

Leave the shop and go to the nearby Scribe's Sacellum. The imp will be on your left, trying (and failing) to hide behind the stolen grimoire.

Theresa Wolf says: It's hiding on the shelf. Adorable.
The imp takes off.

Follow it again to the Legerdemain Lounge and go up the stairs to the upper floor. The imp will be outside on the balcony, attempting to escape through a portal.

Use your class ability to be able to see the imp, which is further southeast and doing a third attempt at a portal escape.

Sneaky Imp says: I'll burn your kneecaps off.
The imp jumps up to an outer ledge above the entrance leading to the Underbelly.

[Double Jump], use your innate ability to reach the imp after first getting to the top of the nearby archway.

The imp gives up and drops the grimoire in order to get away.

Now that you finally have the book, return to Belath Dawnblade at the Fel Hammer.