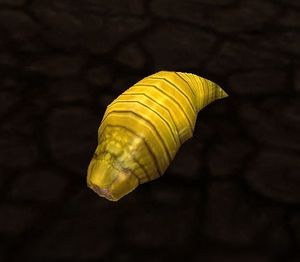 [Hidden Stash] gained by having Fiona's buff while in Eastern Plaguelands.

The grubs of the Plaguelands are a side effect of necromantic corruption and the massive number of corpses there. Mr. Grubbs is from a particularly acrobatic breed.

You need to start with Fiona, located in Eastern Plaguelands, up until you can receive Fiona's Lucky Charm. This is a buff that you need in order to obtain the pet.

DO NOT BE FOOLED! Before you accept the buff it tells you that it increases the gold dropped from mobs but in reality this allows Hidden Stashes to drop off of Cultists, Undead, Ghouls, Undead Trolls among other mobs in the zone (pretty much any mob actually).

Mr. Grubbs is dropped from the Hidden Stashes, so the best place we have found to farm for the stashes is in Zul'Mashar. This is in northern Eastern Plaguelands very north of Light's Hope Chapel.