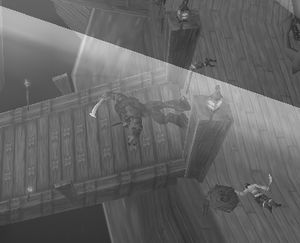 Mr. Smite was a level 20 elite tauren who could be found in the Deadmines. Mr. Smite was the first mate under Captain Greenskin.

Smite was accompanied by two rather tough, stealthed bodyguards that should be polymorphed by a mage, if possible. You generally had to deal with them first while occupying Smite with the tank. Once he was damaged enough, Smite would

[War Stomp] your party and run back to a chest for a stronger weapon. The chest could not be opened, and was just background art for Smite to draw his weapons from. The War Stomp would last 7 seconds and would occur twice during the fight, at 66% and 33% health. After the first stomp, Smite switched to dual reavers, and after the second stomp he switched to his hammer. He still took damage from DoTs during the stuns, and it was possible to kill him during them in that manner.

It was recommended that the two adds be killed before trying to kill Smite, while main tank was focusing on Smite, otherwise they would keep beating on your party while your party was stunned by his stomp.

If you didn't want to be left helpless due to Smite's stomp, it was possible to stun him before 66% and 33% and bring his life down far enough to escape the stomp.

One handy trick against this boss was to have the fastest party member pull Smite back to the end of the dock, then have the main tank keep him busy while the rest of the group burned off his guards. When he used his stomp ability, he would have to run all the way back to the chest to retrieve his next weapon. If his guards were down, this would give the group time to heal up before he returned. If you had enough DoTs stacked on him during this time, it was possible for him to die during the trip, or he could even perform another warstomp on the return trip, refreshing the stun on the group as he ran back to grab his hammer.

Entering You there, check out that noise!

Combat You landlubbers are tougher than I thought. I'll have to improvise!

Although long lost, he's not forgotten. In Mists of Pandaria a rare elite tauren named Yorik Sharpeye has a chance to drop

[Mr. Smite's Brass Compass], which allows players to turn into their favorite first mate. How someone on a lost continent was able to obtain something from a dead member of the Defias Brotherhood is unknown, and it is speculated that Yorik is, in fact, a disguised Mr. Smite. Even their voices are the same and when aggroed he recognizes the player, presumably from the Deadmines. Next to Yorik is a small ship toy, likely a reference to the Deadmines vessel.

Due to his dark coloring and personality, it has been suggested that he may have been a Grimtotem like Hapana, another grimtotem who turned to piracy.