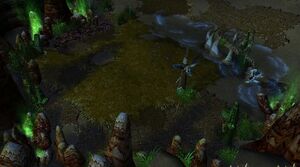 One of the Hot Springs?

Near the windswept plains of Mulgore, there is a series of hot springs that house a ley line pattern. These hot springs have strange healing powers, allowing those who rest in them to heal at double their normal rate.[1]

While taking a flight path from Thunder Bluff to Orgrimmar, one can see a cave and a hut. Though these places are not accessible by normal means, determined explorers who have reached the area say that the cave is shaped like an "S" with a chamber at the end and areas where water could be added in the future. The hut and area is overgrown, with no spots of interest.